All characters begin with one of their Species starting traits. Advanced Species Traits may be taken later in lieu of an elective class ability and tend to represent more powerful, inhuman abilities. 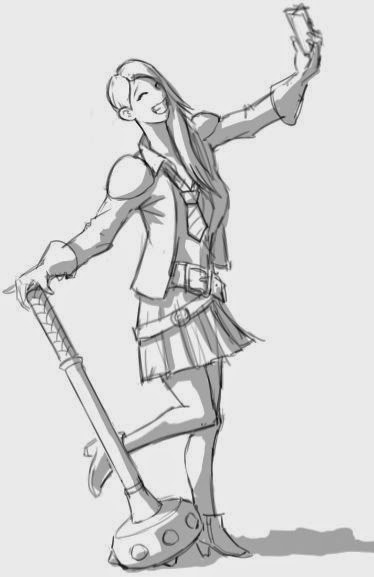 Human
After the Dreaming was ended and the The People were driven away, the world was wordlessly handed to the youthful race of mortals. Despite their missteps and the cruel nature of the world, humanity manages to rise again and again. Whether they will ever again rise to their peak is a question best left to time.

Starting Traits
Prodigy -  Humans have a tendency to define themselves through their craft, and this one is no different. This character may pick a bonus elective or boon from their Calling’s list instead of a traditional species trait.

Exemplar - Some make it by through natural talent, rather than expertise. This human begins with an additional +1 bonus to an aptitude not covered by their character trait.

Advanced Trait
Obstinate - Free will is an important concept to many humans and some hold to it even in the face of inevitability. If the character ever fails their save against a supernatural force or ability that would dominate or otherwise coerce them to act against their own accord (even if said ability or force usually denies its target a save) they instead lose their action so they can angrily cancel the effect and (usually) shout at the originator of it.

Chib
Tenacious as they are diminutive, the Chib’s origins are rooted in blasphemous sorcery. Created by wizards seeking substitutes for children as well as personal amusement, they were abandoned as soon as they demonstrated even the slightest desire for independence. Countless generations later, the Chib have grown hard and resourceful - a natural result when the world sees you as a nuisance at best and “bite-sized” at worst.

Starting Traits -  All chib are small. They incur a -1 to their Might Aptitude and weapons requiring both hands as well as armor heavier than Bastion class are too large and cumbersome for them. They do gain a +1 to their Deftness Aptitude and Defense Rating in exchange.

Better Part of Valor - When this chib is running for their life (or at least thinks they are) they are considered to have a speed value one step higher than they normally do even if weighed down by armor or other forms of encumbrance. The image of a chib thief dashing away with their arms overloaded by treasure was not born from comedic value alone. 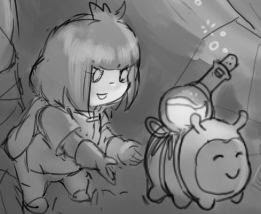 Easily Overlooked - Small and innocuous, this chib is easy to miss. Unless they are making a conscious effort to be seen, then this character is always considered hidden, requiring a successful insight check to notice.

Advanced Trait
Always bet on the Little One - While it seems like the world is out to get the wee folk, fortune often favors the underdog. Once a session, this Chib can be assisted by a divine sort of luck during a contest. This adds a +5 bonus to their total roll. 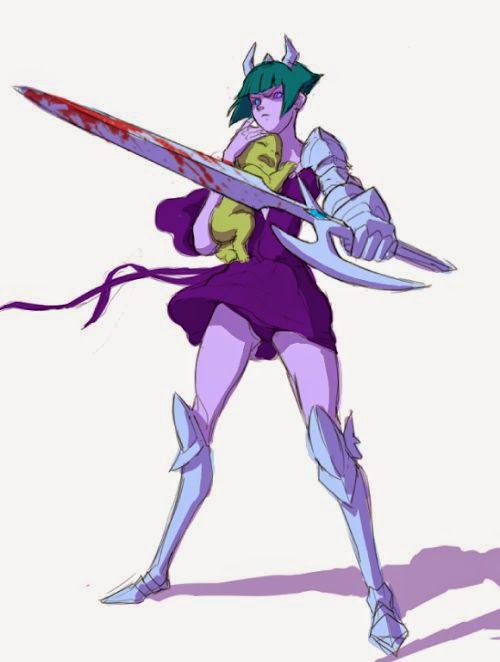 Tenebrate
When the great Sun-Machine was sealed away in the northern lands, many humans were not able to escape to the shelter of the Star Shards. Left to fend for themselves in the Wistful Dark, the Tenebrate exhibit an exaggerated version of human morality - kind, selfless compassion and cold, bitter anger are both common among the Shadow People.

Starting Traits - Tenebrate have an innate resistance to the corrupting effect of the Shadowed Lands and do not have to suffer any of the negative effects that usually plague unprotected travelers in that place.

Shadow Sight - Those born in the shadows are often most comfortable in them. This character’s eyes are opaque and an odd color (usually greyish or light purple). These allow them to see in total darkness without penalty, but are a bit sensitive to light. Bright light (equivalent to daylight or greater) causes them to have a -1 penalty on all rolls at least partially dependent on sight.

Dark Gift - While many tenebrate struggle with their natural connection to darkness, there are those that embrace it without hesitation. This character begins play with a single minor corruption, rolled on the table in the settings section.

Advanced Trait
Eventide Champion - A balanced soul allows this character to resist both their inborn nature and it’s opposite. A Tenebrate with a Twilight Allegiance may select this ability, and gains resistance to hostile light and dark based attacks. 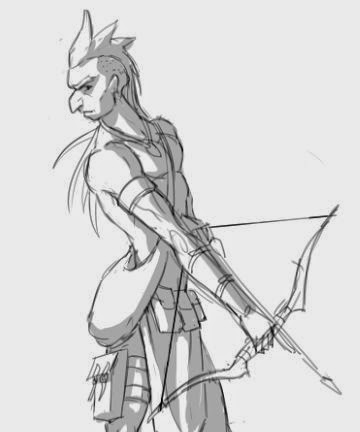 Obake
Lycanthropes, Skinwalkers - the Obake are known by many names. Originally a servitor race of messengers and diplomats for The People, the shifters were left to their own devices when their masters fled the physical world. They have flourished in the post cataclysmic landscape, easily walking between the realms of men and beasts thanks to their innate talents.

Starting Traits - All Obake begin play with an animal form, through which one is entirely up to them. The below is true regardless of the form selected.

Posted by NaldoDrinan at 17:24 No comments:

The third and final Calling included in the Sword Saga play test is the Battle Princess. I wanted this sort of character to be the type that really benefits when one puts a lot of extra thought into what their character is thinking and feeling. That sort of thing is always its own sort of fun, but it is nice for it to have a mechanical effect of sorts too.

I am really happy with how this turned out - but if you aren't, I really want to know so I can address any concerns. I think this archetype is one of the things that will really help individualize Break!!, and I want it to to be the best it can be for that reason.


The Battle Princess
Weapons: Heart’s Blade only (See below)
Armor: All

Princess Type - The Battle Princess is defined by what the wish to protect. While they are not always noble, their powers are drawn from whatever positive feelings they have for the people and things that are closest to them.

The character’s initial princess type is decided by their origin. This may change later thanks to their allegiance; If a Battle Princess gains abilities that switches them to a  Dark Allegiance, then they will become a Murder Princess, and vice-versa. If a Princess does not swing strongly to one side or the other, they will likely change multiple times in their adventuring career!

A Princess with a Twilight Allegiance will default back to their origin’s type.

It is important to note that Battle Princesses are not always good, nor Murder Princesses always evil. Like Light and Darkness, both can represent noble and ignoble causes - even if they lean towards certain tendencies.

Heart’s Blade - Both Battle and Murder Princesses are able to call forth weapons forged from their soul. They begin with the ability to summon both standard weapons and thrown missile ones. At rank three, an additional form may be selected from any of the normal weapon types. At 5th and again at 7th rank, one more form may be selected from any weapon type including combo ones.

Every form of the Heart’s Blade has a consistent design or motif, decided at character creation. It is always considered an Artefact for purposes of hitting monsters, doing damage or defending (in the case of shields). It takes a single round to create, and any missile weapons appear with 1d6 pieces of ammunition included.

The character may summon a new Heart’s Blade at any time, and can have two active at once. Summoning another Heart’s Blade after that will cause one of the others to vanish.

Shield of Love (Battle Princess only) - The character may bestow an ally within their sight a bonus heart that lasts for a single combat encounter. This is granted at will and can be done in addition to any other actions the player wishes to take in a round. These are generally the last heart to be lost, and the Princess can sense when it is.

The Princess may grant an additional heart per combat at rank 4 and again at rank 8. These may be individually or all at once, but they must all go to different recipients.

Sublime Hatred (Murder Princess only) - The Princess’ loathing of certain sorts of individuals is so great that it’s a weapon in it’s own right. At first rank, the player may name a sort of opponent that the Murder Princess especially despises; they receive a +2 bonus on all attack rolls against such foes. At rank five, they may either intensify this hatred (increasing this bonus to +4) or choose a second target to receive a +2 bonus against.

Targets can be any creature that exhibits a particular behavior or a  specific sort of foe.

Examples of the first type include;

Examples of the second type include;

In rare circumstances, the Murder Princess may relax their hatred or re-prioritize it. If this is the case, they lose their bonus and may re-apply it to a new sort at some point in the future. There should be good, in-game reasons for both these changes, and they are naturally subject to GM approval, but there is no need to be too strict.

Soul Burst - The source of a Princess’ power is their mortal soul, which is a naturally tumultuous thing. Times of intense emotion can bring forth dangerous power to be used to protect allies or smite a hated foe. The events that bring about such a reaction are not set in stone, but common examples include:

The player may activate this ability when such an event occurs. This is usually accompanied by an appropriate (for the character, at least) exclamation, such as an angry shout, earnest tears, or somber look of grim determination. The Princess is then immediately granted the following bonuses, +2 to attack and aptitude rolls, a bonus heart, and an additional boon from the Advanced list. This may be selected by the Game Master or rolled randomly (re-rolling any repeat results) depending on the situation. Given the nature of these abilities, it may temporarily change the character’s Princess type for the duration of the Burst. All effects end when the catalyst event is dealt with (Such as the death of the killer in the first example), becomes irreconcilable (if it becomes impossible to complete the task in the second) or if more than an hour passes.

There are two important limitations to this power; It may only be used once per attained rank. While it may be activated again after a new rank is achieved, these uses do not stack. More immediately, the Princess must make a wound roll as soon as the effect has ended. The die used and the effect rendered is cumulitive with any existing injuries inflicted on the character.