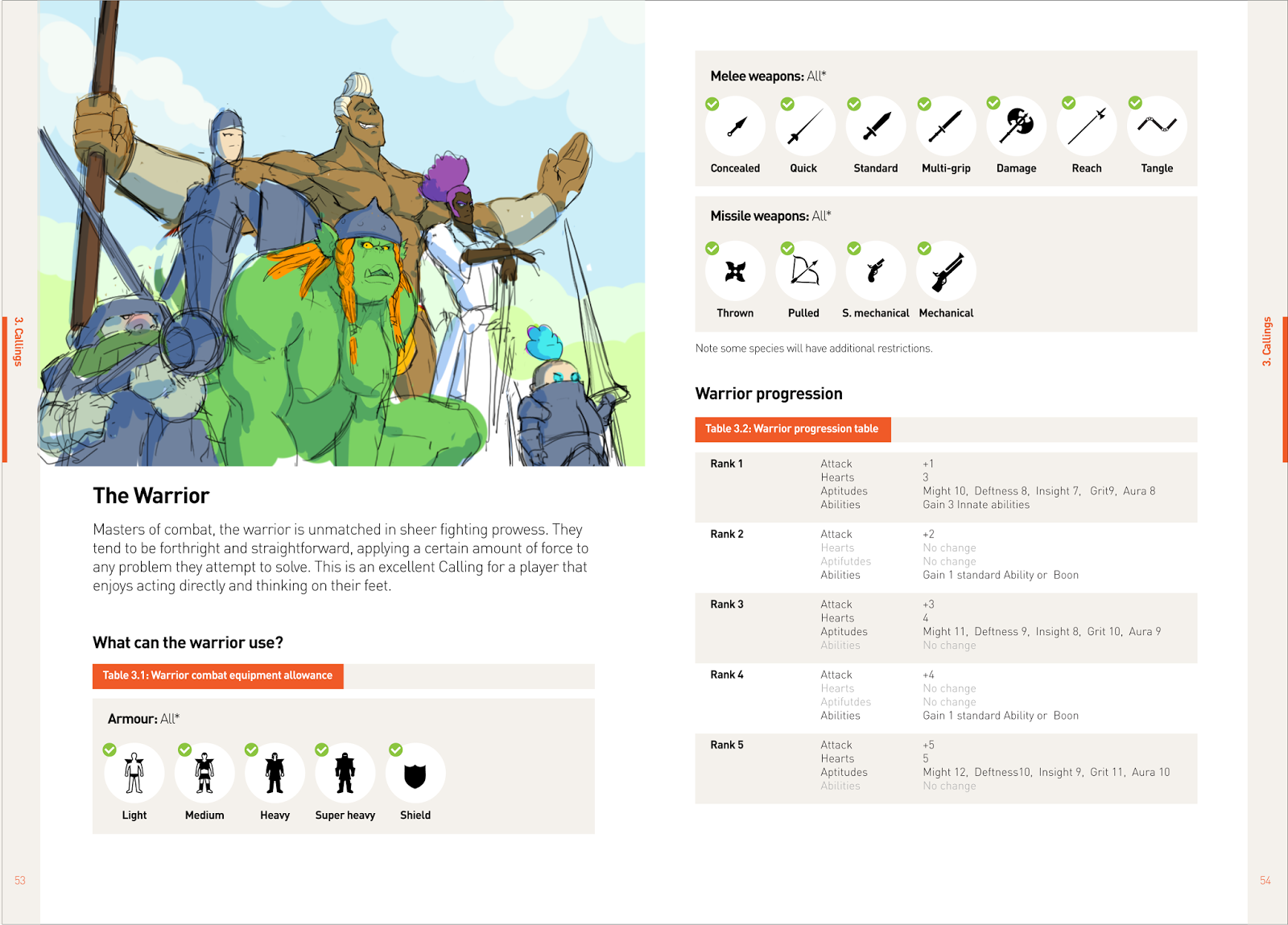 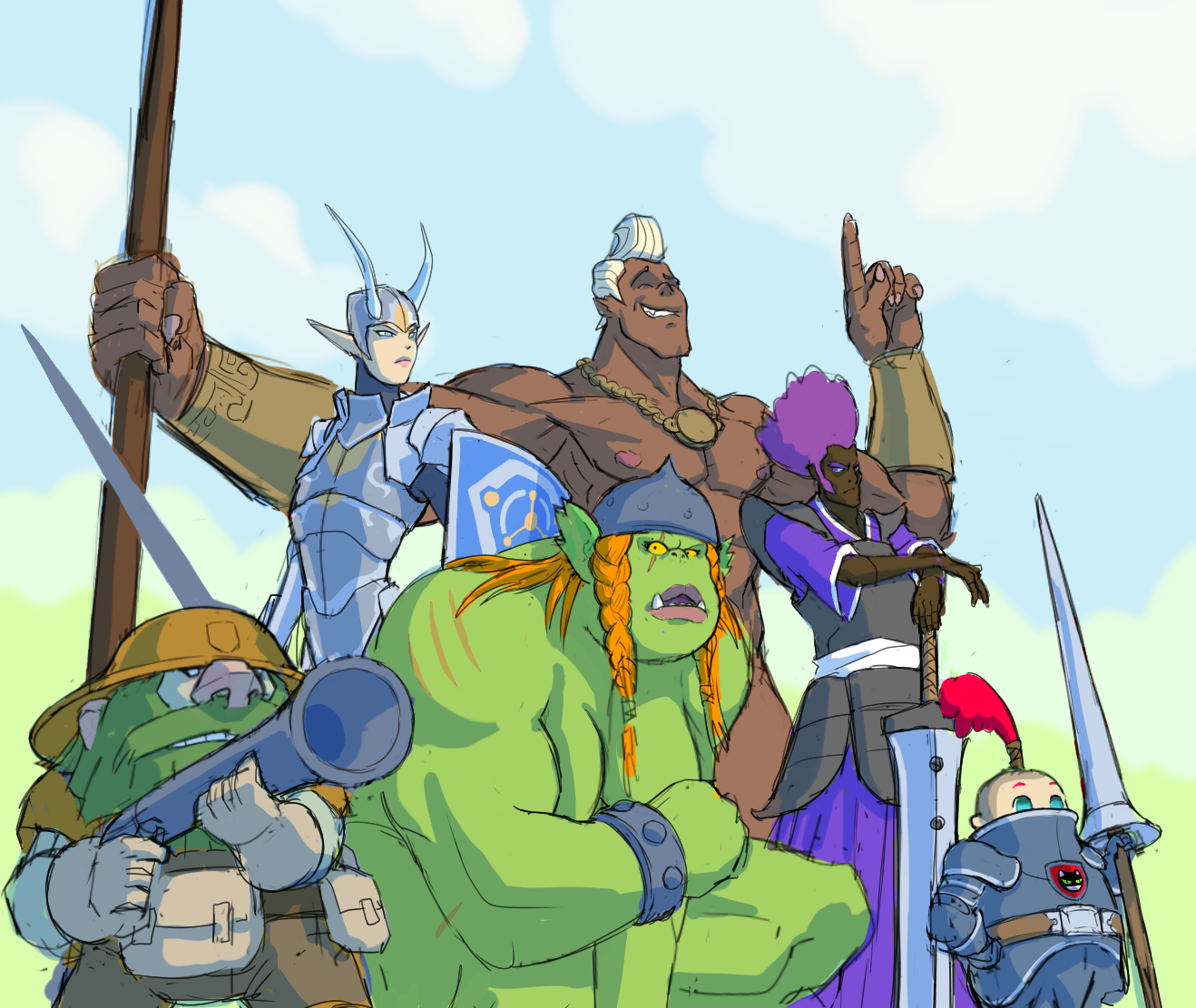 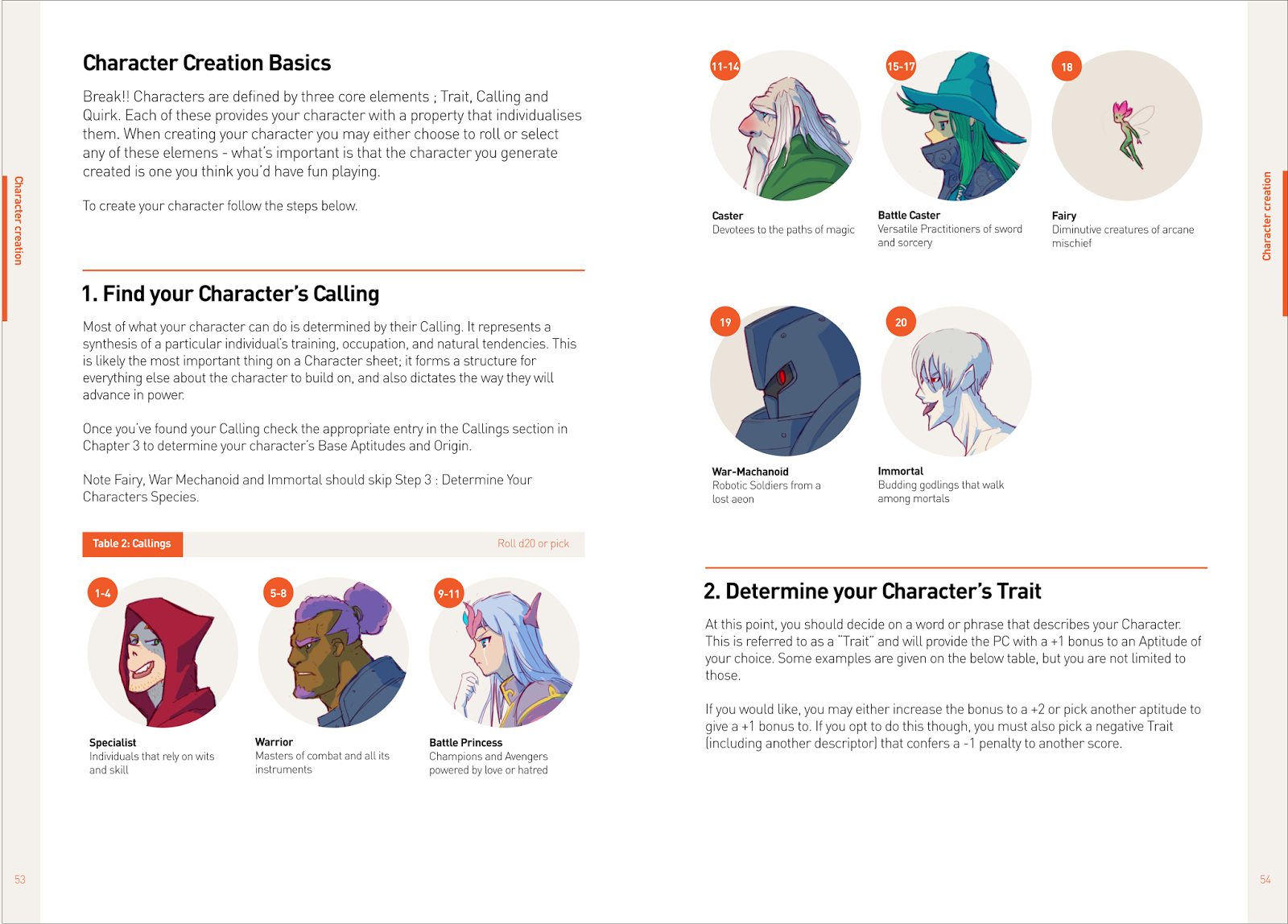 Note-to-self: We should put a contextual note on Fairy, War-Mech and Immortal (as they are calling + species combinde) rather than just in body text.
Posted by Grey Wizard at 04:19 14 comments:

Getting more comfortable (and quicker) with colour. Was originally thinking black and white interior art but might go wild. Could be useful for the infographics too (bonus/penalities etc) 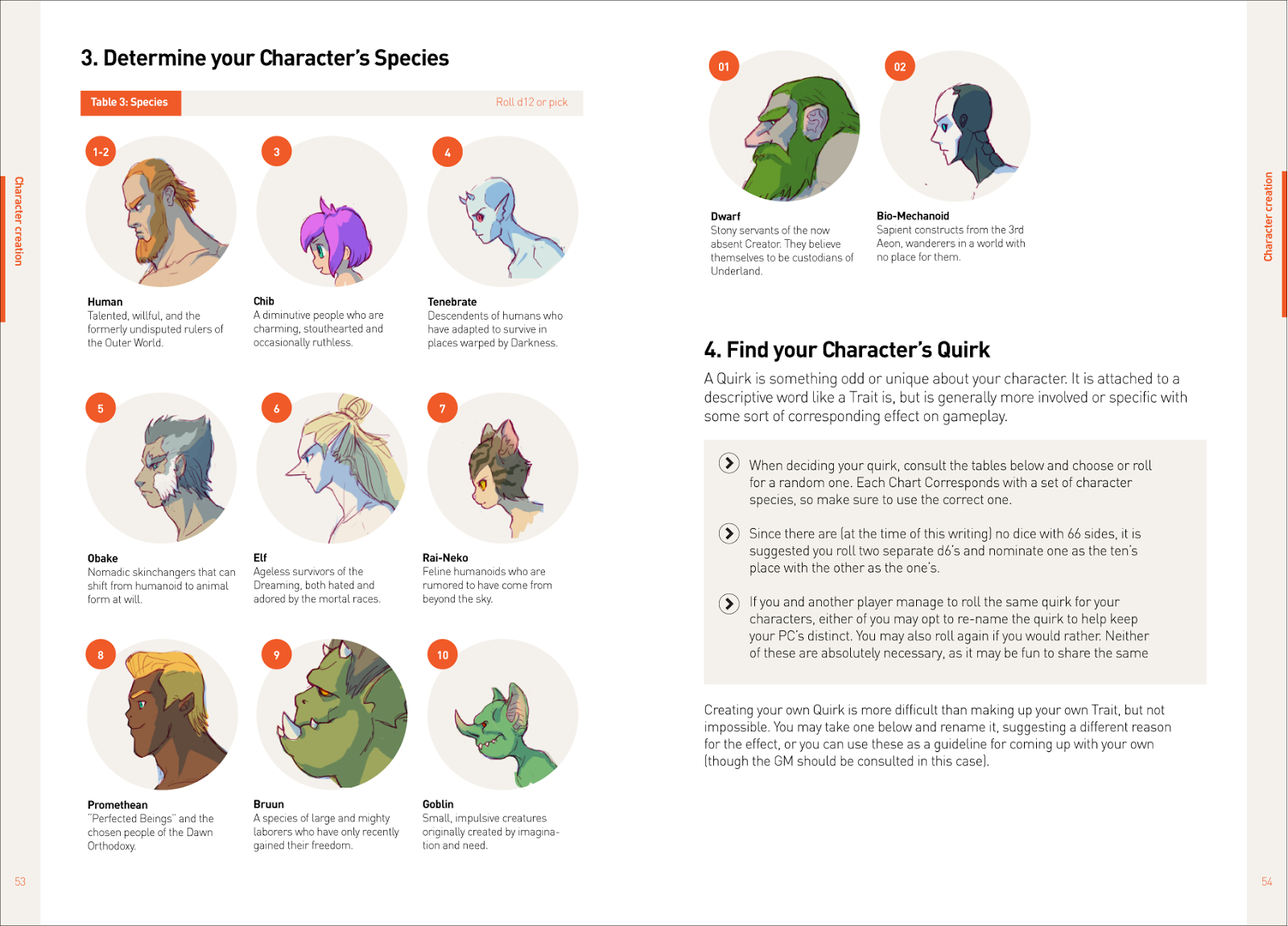 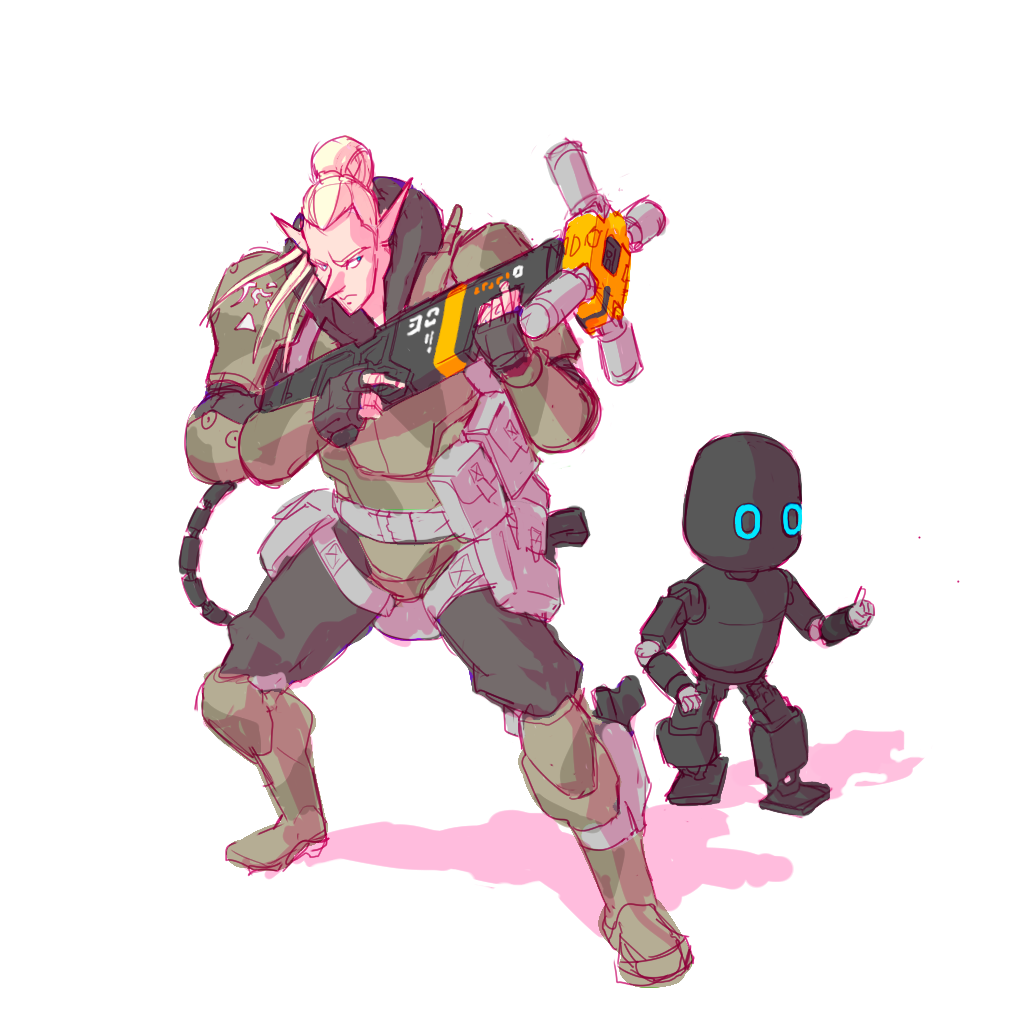 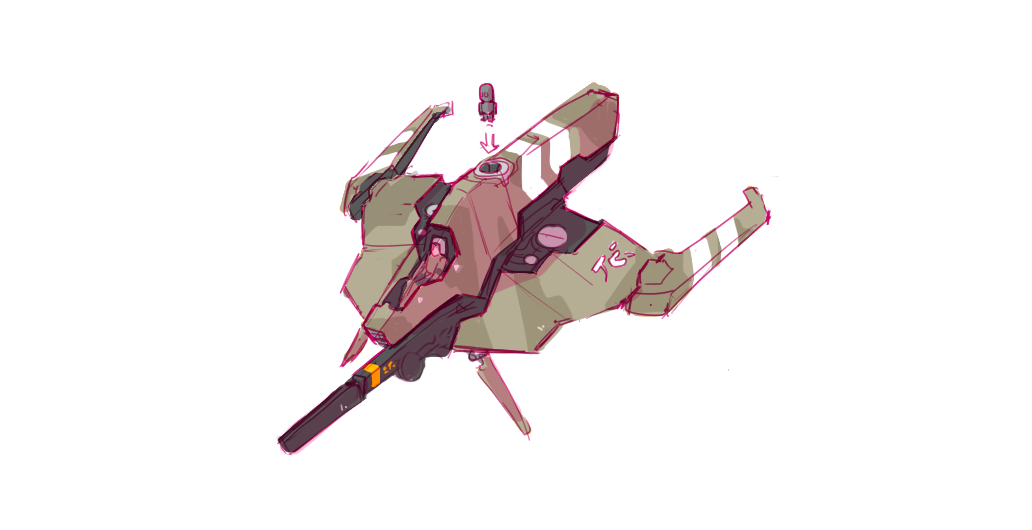 Skimmer with robo-chib dock
Posted by Grey Wizard at 14:01 1 comment:

The Primary Faiths and Philosophies of Outer World

The Church of the Sacred Chain
In spite of its relative youth among the Outer World's faiths (having only surfaced at the beginning of the Fourth Aeon) The Sacred Chain has become so ubiquitous in the Kingdom of Shard that it is often referred to simply as "The Church". There are multiple reasons for this, but most obvious is the looming presence of its Knightly Order in just about every corner of civilization of the Wistful Dark. Even the most bitter of the Church's detractors must quietly admit that they ensure the peace and tranquility they enjoy each day.

It's primary tenets encourage a balance of Light and Darkness within the greater structure of society as well as reverence towards the Sealed Gods and "enlightened moderation". Its followers often come in conflict with members of the Dawn Orthodoxy and Arcane Progressivism.

Umbral Adventism
Communion with the Dark was perhaps the first real faith. Formed almost as soon as mortals could speak, it blossomed into open worship for a brief time after the fall of the High Fey. This aspect did not survive more than a few clashes with the Dawn Orthodoxy, and the religion quickly slunk back to the underground. It has thrived their since then, with both the very affluent and desperate making quiet pleas in the shadows.

Umbralists would contend that it is not a duplicitous theology; neither its followers nor the Gloom itself makes false promises. It is a religion of ambition and the self. It teaches to embrace power and to seek the fruition of your greatest dreams, no matter the cost. While it does not actively endorse wickedness, such things may be hand-waved as necessary or even just practical.

Kingslayer's Mandate
It is said that every mortal has the an oath burned in the back of their minds, waiting to rise to the forefront when robbed of dignity and purpose by another. The second cataclysm and prosperous age of humanity (the Third Aeon, specifically) was brought on by Aken, a woman who declared that no being should be enslaved by another, even if those slavers are the Gods themselves. This deceleration was reinforced by the strength of her spirit and the loyalty of those around her; even those once cowed found might in her words. While she tragically fell to the blade of the Iron King, she proved that he could bleed - and those who held her banner were more than happy to overwhelm him and seal both Asura and Devas away from the world.

The Mandate promotes freedom above all else. In the eyes of a true adherent, no thinking being should be chained or controlled. While generally a lofty ideal, there are no shortage of sociopaths and violent anarchists that also rank among true believers. It is an intense philosophy with a popularity that waxes and wanes. Indeed, even the grand kingdom of Akenia (named for the Mandate's creator) eventually abandoned it to embrace Arcane Progressivism.

The Dawn Orthodoxy
One of the oldest known religions, the Orthodoxy was created by Regulus, now known as the Emperor of Sol. Even with the Sun Machine broken and anchored above the city of Aeon, those under it's gaze still follow it's teaching's quite passionately. It is not limited to them; faith in the power of light even finds its way into the hearts of those stuck in lands of darkness, often to the chagrin of those in power their.

The Orthodoxy's teachings belie their strength with raw simplicity; Truth and clear-eyed obedience above all else. The Darkness is your enemy. It clouds one's vision and deceives them towards unholy paths with honeyed words and promises of power. Darkness can only be banished with Light, and those who would remain righteous must be vigilant. The religion is quite popular with the Devas, but less so with the dark-aligned Asura who are (often rightfully) condemned by it.

Arcane Progressivism
Simply put, Arcane Progressivism is the belief that magic should be put to use for the betterment of all living creatures. It's popularity during the third age can be attributed to the prevalence of casters and magitech in that era's greatest nations. Initially proposed by the great wizard Dizer Gren, the philosophy broadened and grew with time. While the positives and negatives of it's influence are often argued, the cause of it's sharp decline in power is undeniable. When the great Kingdom of Akenia fell before the might of Regulus and the Sun Machine, the faith as it was understood was shattered.

Arcane Progressivism is a mostly idealistic philosophy. It is predominantly concerned with the use of one's talents or magical abilities in the service of others, though it speaks predominantly to mortal casters. Even the Asura and Deva themselves are presented as partners at best, and even other mortals without magic are generally referenced in pitying tones. Regardless, the religion has managed to find some footing in the fourth age, thanks to Princess Seika of the Seven Holy Isles adopting it as the primary faith of that region.
Posted by NaldoDrinan at 15:44 No comments: 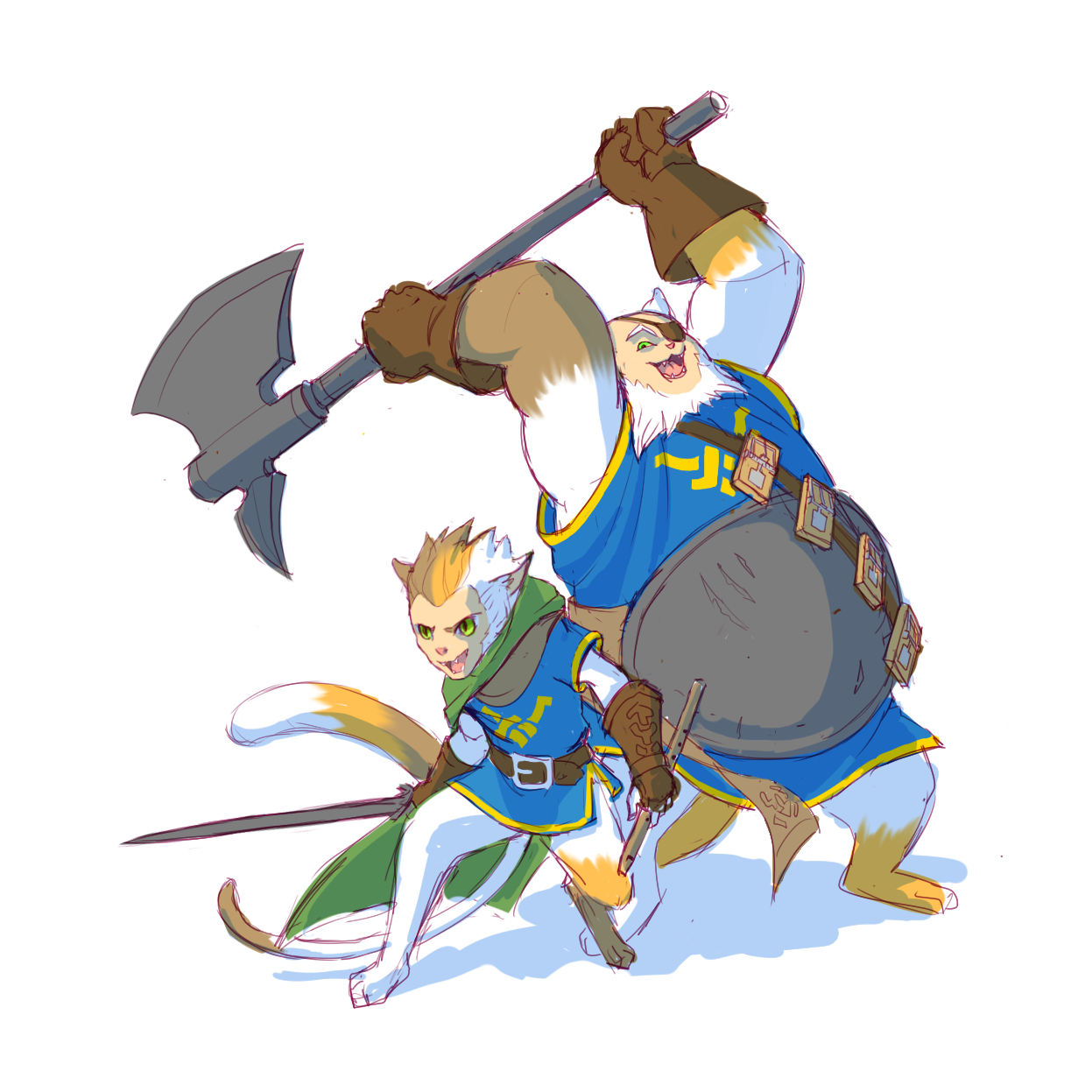 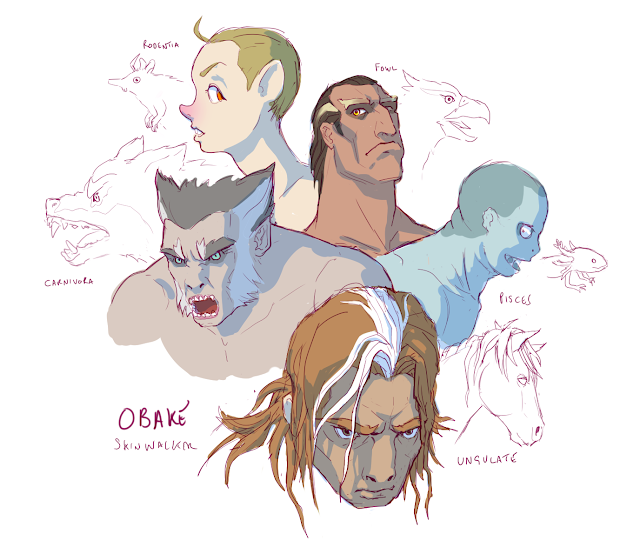 Dear Readers, I am at a slight impasse and could use your input.

Long story short; Each Calling in Break!! has a list of origins. These are here to help define who your character was before the start of the game. It gives you your Purviews (Abstract skill groupings really, generally there for you to score bonuses when they apply) and some bonus starting gear. It also comes with a (hopefully) cool name to write on your sheet.

There is also a description included. My hope was this would help jog player creativity or at least provide some clarity in case there wasn't some. One of my early proofreaders pointed out that really, that job could be covered by Purviews and that the Description was potentially superfluous.

I think I agree with her.

(Please note we are still in draft, so the text in the below entries will likely change here and there)

The One without takes up less space, and allows for more freedom of interpretation with the result. I may need to spruce up the Purviews a bit, but otherwise I think it's a good change. What do you guys think?

EDIT:
Here is what I'm thinking now. I think this is a big improvement, but I've been wrong before. I will likely re-evaluate Purviews a bit as well. 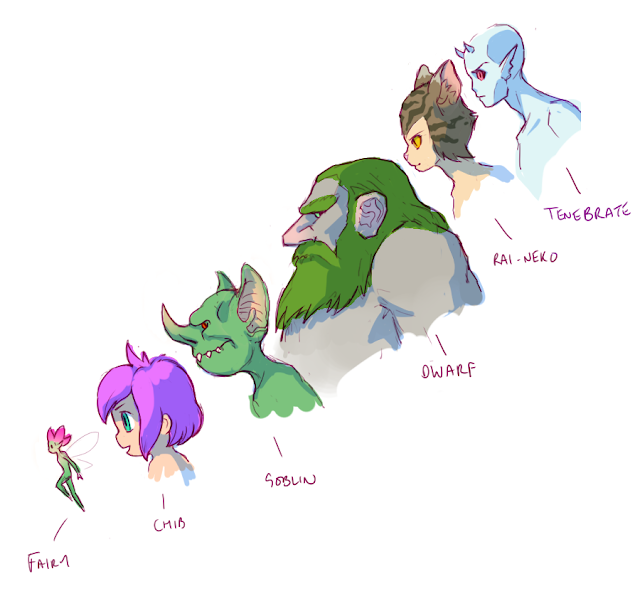 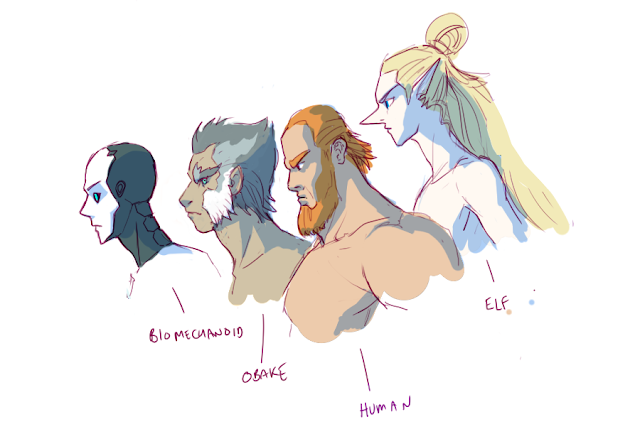 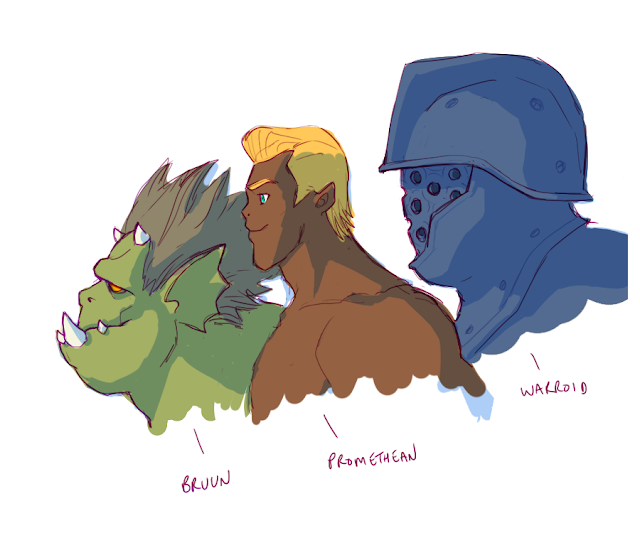 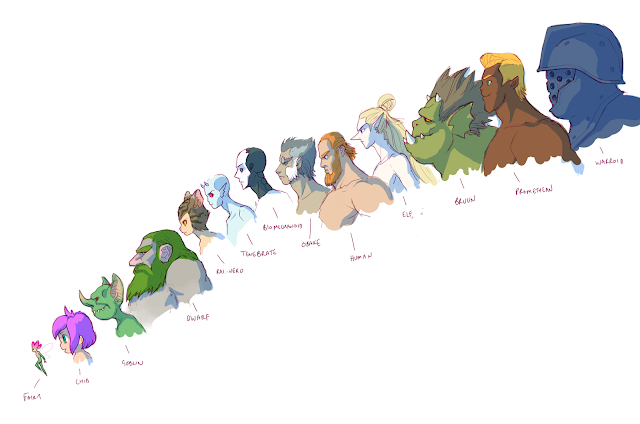 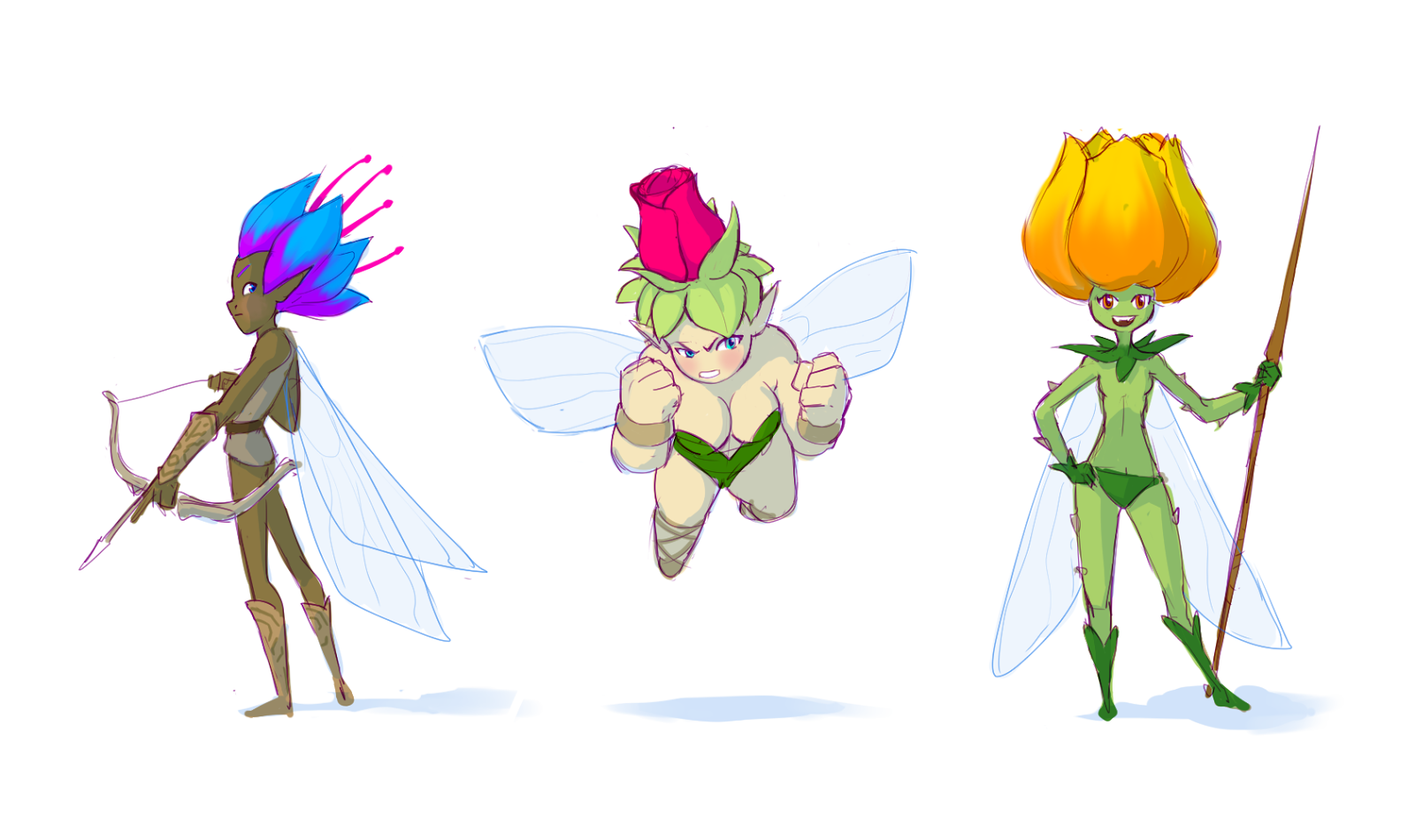 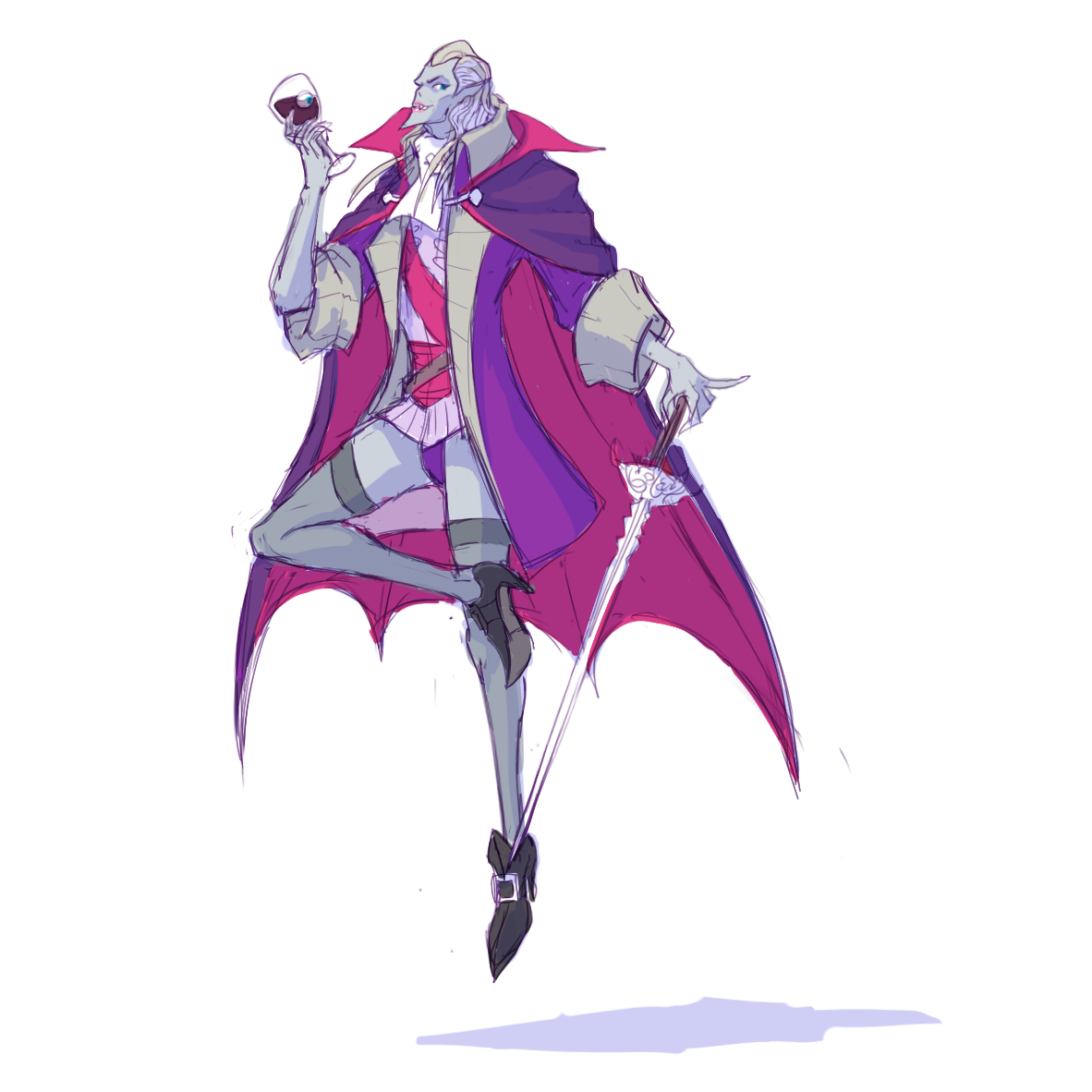 Malagast (Pensive, repentant shade) Immortal, dark aligned. Once the lonely, brooding and evil sort, he was convinced by Vahnal to do something more benevolent with his power. Does his best, but he tends to accidentally scare children and attract adolescent admirers. Levitates everywhere, generally attacks via darkbolt.