Procedural/mechanical rules will be differentiated in style from regular body text so they can be read independently of the fuller explanation text.

Looking at margin section dividers too for extra flickability.
Posted by Grey Wizard at 13:28 7 comments:

Its my hope to post something to this blog every week. I know I'm not on an externally enforced schedule of any kind, but the fact that anyone has displayed interest in what's being done here is enough to make me want to keep at it. Besides, posting here will keep me thinking about where I am and pushing me to finish things in a reasonably timely manner.

For the last few days I've been really buried in the basics of character creation. This sort of thing is actually fairly hard for me to write; I usually start with bare bones stuff and build on it as people request various character types and options. While that works in a home game where you're playing with friends and family, its not always helpful when you're trying to write something for other people to use. On the other hand, throwing in a lot can bog down the process, and is especially bad in a game where it's fairly possible for your character to die in any given adventure.

What I'm trying to do with Break!! is make a system that allows you to have a fun and unique character in a couple minutes or so. This means several "Roll or Choose" tables, and bits that come from them that add some simple but interesting touches to your PC. Your character's Class and Rank will be the main arbiter of their abilities and potency, but hopefully the above stuff will make it feel like your fighter is different from the fighters before them.

I'm nearly done this part, and while it will likely need some tweaking afterwards - I have full confidence I'll hit the ground running and get the meat of the rules to paper in no time.
Posted by NaldoDrinan at 20:35 No comments: 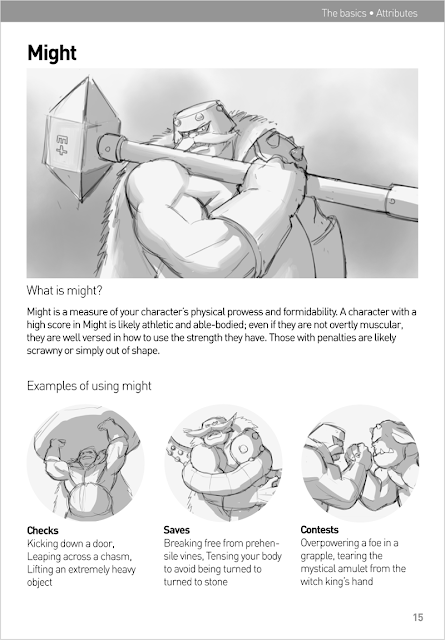 Maybe this chunky character is too obvious to properly represent the Might aptitude. Rey even states in his copy that this attribute does not equate directly to muscularity and encompasses prowess too. So will maybe address that in future iterations.

Not sure we need the big illustration at the top either - it's not really adding much. So I need to make it more functional or possibly just use the example illustrations as they better describe what affect attribute has in the game.
Posted by Grey Wizard at 03:04 7 comments: 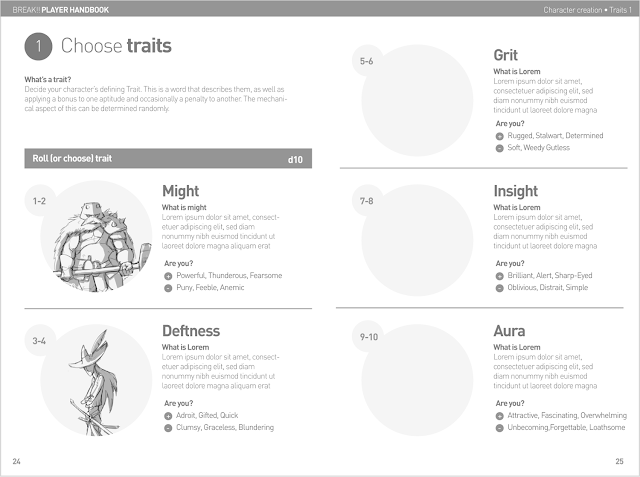 Not exactly in line with Rey's current document structure (or indeed anywhere near finished!) but sharing because it's kinda related to the previous post

Should prolly show a positive (+) and negative (-) example of the trait/aptitude in the illustration. Aptitude descriptions will now be disclosed in an earlier section, but it still might be nice to have a tiny bit of contextual info on how the +/- affects the game. Don't want massive duplication of text but want to avoid flipping back and forth to cross reference constantly. Like a good instruction manual, the information you require should all be on the page for the task at hand (in this case creating a character).

The rules should be:

1) User-friendly
Easy to use when, where, and how you need it.

2) Based on sound learning principles
i.e. users actually learn from it, not just refer to it.

More What is Break!! and some stuff on Aptitudes

I suppose I should address a potential elephant in the room; Is Break!! a retroclone?

Yes and no? I mean, not really in the end. It's easy to appear as such. The game built on a chassis of my favorite version of a popular fantasy game. My taste certainly runs in that direction, and I do a lot of rule hacks on my other blog. But like many recent games (Old School Hack or Stars without Number, for example) it is a new game built on the principles demonstrated by those older ones.

Admittedly, there are man deliberate parallels to D&D. This is partially for a bit of comfortable familiarity, partially because it makes the games vaguely compatible with some legwork, and mainly because I like those things and I feel like they work well. I just took them and ran with them in a direction that works.

Anyway, I suppose I should go on and talk about the game itself. I'll get to the subject I mentioned in the title.

(I'm going to be a sneaky Pete and bold things that I'll talk about in later blog posts.)

Aptitudes are a measure of a PC's general competency in a broad area. They are generally dictated by a character's Class and Traits, with their Quirks and Species occasionally coming into play as well. They start fairly low and get to a more then respectable level as the character goes up in Rank. They generally come up in three instances;


Since I'm blogging and not writing in the actual game book here, I'm going to digress a bit and mention that Aptitudes are a combination of D&D's Ability scores and Saving throws. I liked the broad application of the former and the fact that the latter scaled along with the character, so I thought: "Why not combine them?". The categories kind of line up with the five original saving throws, but I've broadened their categories in hopes to make them a bit more usable in general play.

The five Aptitudes are Might, Deftness, Grit, Insight and Aura. I'll go into the specifics in the actual game document, but obviously some classes specialize in one and suffer in others. Its also important to note that each is important in the end. Sure, you can try to skew your Checks a certain way, but Saves and Contests of each type will come up one way another. I like this because it means you can have characters with an odd set of traits for their class (Such as a Fighter with a penalty to Might and a bonus to Aura) and have them be simply more distinct, as opposed to less effective overall.

As far as resolution mechanics go, Checks and Saves use a "roll under" mechanic that should be familiar to anyone who uses Ability Checks in old school D&D. Contests use a slightly different rule, but it's still relatively simple. My hope is that by keeping their use simple, the game moves at a brisk pace while retaining clarity of result.

Alright, I think that's a good length for a blog post. Don't want to bore all you kind people after all! Please feel free to field questions below; this blog is foremost a conversation between myself, Grey and all of you fine readers.
Posted by NaldoDrinan at 17:01 7 comments:

So Rey is thinking about having three rule books: players, conflict, gamesmaster.

It would be great to tie the three books together thematically, but also have them clearly express the content of the individual book. I think consistent characters/monsters could be a way to do this.

Here's a first sketch of the inside cover art.

Something like this to illustrate the character creation process flow?

What's all this now?

This blog is dedicated to an ongoing project called "Break!!" that Grey Wiz and I are collaborating on. Break!! is a role playing game in the tradition of Dungeons & Dragons, Stormbringer, Warhammer Fantasy, Exalted and numerous other games in that vein. It is an attempt to take the ideas I love from these games and other numerous sources and streamline them into something that is fun and simple to learn while retaining the depth and infinite possibilities that can come from tabletop gaming.

Grey Wiz is lending his considerable artistic talents as well as an innovative sense of design to these efforts. I have yet to find a better way to describe his layouts then dynamic and "visually ergonomic"; it sounds like terrible business jargon but I'm being sincere. He'll be posting his rough sketches here as well, so you'll likely get to see what I mean.

Anyway, I will be the first to admit that I started writing this for myself. Break!! will always be a game that I want to run, and my hope is that it something that others will find useful as well. 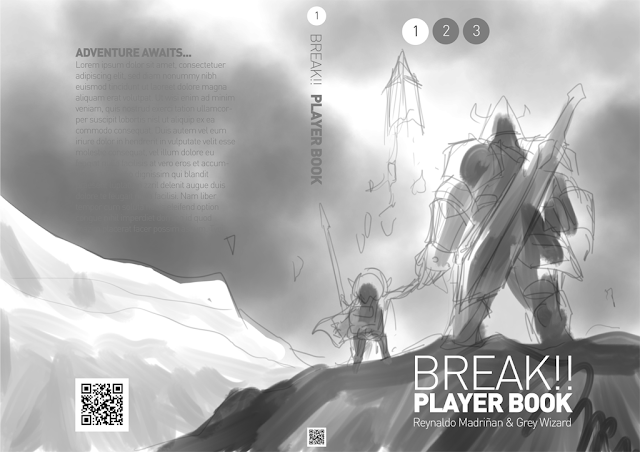