In a rare opportunity granted to me by my friend and occasional Podcast partner, Kiel I actually got to sit down and try the game I wrote as a player, rather than a Game Master. It was a great experience, and Kiel took to the rules and setting of BREAK!! well (he's already house-ruling around and mucking with the world, but hey, the game is supposed to be a stretchy like that).


We explored Rend, a Shard City in the Wistful Dark. Kiel's very own creation! Look at the fancy map he made!

The other players weren't slouches either.

I was joined by Sam Mameli's  Fife Moon, an intrepid Chib Farmer.
Sam, being a fantastic artist himself, made his own sheet

Arella (who Kiel and I mentioned in our podcast a few episodes ago) also joined us. Following Sam's lead, she created a custom sheet for her Tenebrate Factotum, Komali.

I showed these to Grey and he was wowed! And then he demanded I do the same.
I obliged, and further demonstrated why Grey is doing the art for this book and I am not.

The session was quick and fun. Lots of banter between the characters, an encounter with the "Noodle Boys", who may or may not have resembled characters from the 15th iteration of a very popular J-RPG Game, and a battle with a strange, wolfish humanoid. I look forward to continuing next week!

EDIT:
Kiel also sent me a few sketches of the NPC's from the session: Biggle and his missing Biomechanoid buddy, X79. 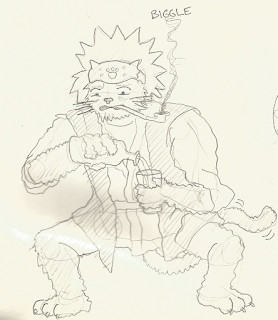 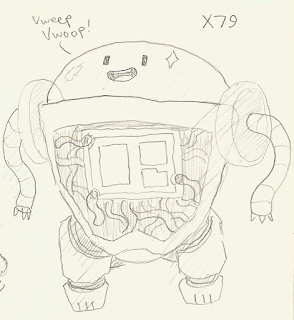 Posted by NaldoDrinan at 19:14 No comments:

BREAK!!-ing in adventures from other games

Grey is hard at work in layout land and I'm finishing up the rules to play shape-changing tree wizards and out of work bureaucracy gods - so why not have a mostly fluffy anecdote for my first post of 2017?

I don't buy a lot of modules to be honest. When I'm not writing up rules and goofy setting stuff I like to doodle dungeons and come up with huge lists of adventure hooks. This is due to my genuine love of game session preparation and the fact that I'm a bit of a control freak.

That said, I do occasionally buy adventures when someone I like writes them and I want to support their cool thing (and I remember to do so). This was the case with Kiel Chenier's Blood in the Chocolate. This swanky scenario was designed for Lamentations of the Flame Princess, which is a very slick, horror themed re-do of old school D&D.

Naturally, I inserted the adventure into my much lighter, anime style game. You know, the one this blog is about.

It was less hard than you'd imagine - mechanically, BREAK!! squares up enough with most fantasy games that it's a matter of swapping out this value for it's closest equivalent and calling it a day.

(The Game Master's guide I finished a while ago actually has a chapter on doing this!)

I did take it a step further and altered some of the bits to make it fit BREAK!!'s standard setting and my own style. Kiel is actually way more hardcore than me, so I softened quite a few aspects. The lead villain ended up getting boosted a bit, and she fights like Rufus from Street Fighter if he used a rapier. She also became the elder sister (an perpetual rival) of the player's current patron but retained her raw charisma and odd foibles.

A strange little mutated tribe that works in the factory became the Cocoa Cretins (with an ability called Cacao Kapow, which inflicted a random curse from the book itself) who kept people that had been immobilized by afflictions as decorations for their living quarters. The human guards were replaced with Skelemen and a Skelemaster, because I really like those entries and wanted to test them out. I figure it makes sense for the villain too - who better to guard edible products than things that never eat?

It went pretty well - my wife abandoned the rest of the players when she figured out the adventure was a Willy Wonka riff, but her antics eventually saved the party from what would have been a likely fatal encounter. They escaped with their lives and a few stolen goods, and will likely have to deal with the sinister choclatier at a later date.

Posted by NaldoDrinan at 20:13 No comments: