I've actually got a lot of what I want out of this thing ready - now, its a matter of fleshing out certain things and fixing up the writing.

Below is my current table of contents - I'll admit the GM section and the test module are just notes in one of my spirals at the moment, though.

So what do you think? Am I missing anything essential?
Posted by NaldoDrinan at 18:42 2 comments:

Blizack over at Dungeonskull Mountain inadvertently pitched an idea to me; Take a picture provided and give the central character some Break!! Stats. I probably could have gone into more detail, but I liked being simple with these - seemed like a more effective way of kick starting the imagination of the reader.

(I posted the pictures as links in hopes the artists would get the attention, just go ahead and click them and it should open them up in a new window)

OK, back to actually writing the game for now. If anyone has an especially neat character they want me to work like this, please feel free to send it my way...you know, somehow.
Posted by NaldoDrinan at 19:51 2 comments:

It's come up a lot in the previous entries, but here I will state officially that the forces of Light and Darkness play a big part in Break!!; as you can see in the character sheets that Grey posted earlier today, there is a little box with both of them in it that beckons to you every time you look at it.

In grand video game RPG fashion, there isn't really a good or evil here. They are grand primordial energies, with subtle motivations that are distinctly inhuman. While they do encourage recognizable traits when filtered through a mortal soul, neither has a monopoly on right and wrong - both influence those attuned to them in positive and negative ways. There are numerous religions and philosophies that try to interpret (or, more cynically, fabricate) the desires of these forces for various reasons, and just as many individuals who treat them as one more source of power.

Which is all well and good I suppose, but what does that mean for the average Player Character?

Most of them will begin play free of Allegiance; which is to say, they have 0 points in both Light and Darkness. Various happenings will increase your score in either of these two pools, including but not limited to;


If the amount of points accumulated in either Light or Darkness ever exceeds the other by two, you are considered to be aligned with that side. If you have points in both, but neither is greater then the other by the above margin, you're considered to have a Twilight Allegiance. Gaining a high amount of points in either will also result in "Gifts": changes to oneself that generally have positive and negative effects that are proportionate to one another. People who've devoted themselves to these forces are always slightly odd, at least as far as normal people are concerned.

Beyond Gifts, these scores have an effect on how certain things react to you. Magic Items have Allegiance point requirements (and limits) for their use, spells and other effects wax and wane in potency when used on aligned individuals and otherworldly creatures might actually notice you. Some devices even depend on these scores; there is at least one door that will not open for someone with Darkness in their heart.

Many characters also have the choice of ducking out entirely - they can avoid magic and boons and remain unobligated in cosmic power struggles beyond the ken of ordinary mortals. But ask yourself this; Did anyone ever manage to get sweet glowing eyes by fence-sitting? I don't think so.
Posted by NaldoDrinan at 17:15 No comments:

Early concepts
Rey's original concept (left) & restructured (right). Still kinda like his original sketch with the image in the middle. 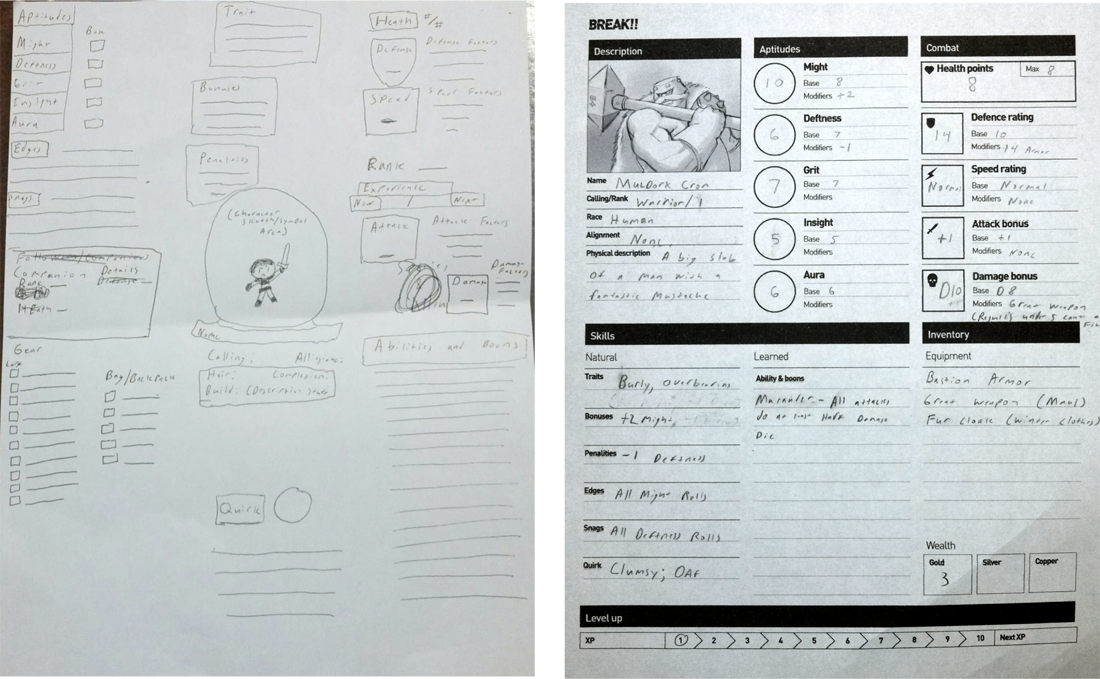 Data experiments
Interesting but space hungry (or impractical) data visualization .Bar chart for aptitudes, allegiance axis and hearts scratch pad. I may revisit and incorporate these if I can get them to work/fit. 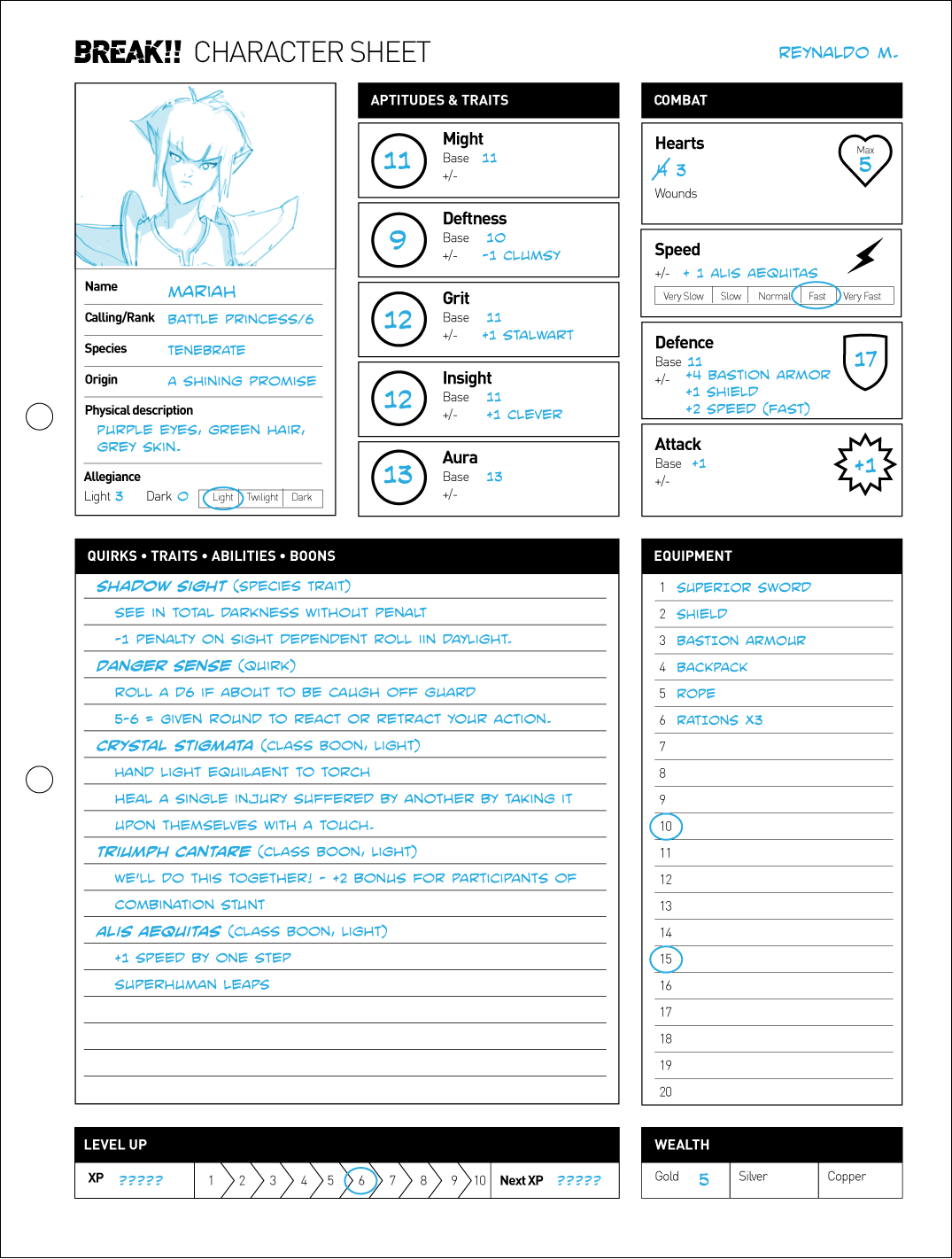 Got few other ideas I want to try out (like multi-flavour variants: 8bit, Retro/classic, minimalist) but this attempt feels like a tidy/pracitcal design and I DO want to try and push this a little more.  Anyone seen anything interesting? Like this awesome stuff by Nathan over at Platonicsolid.
Posted by Grey Wizard at 03:31 5 comments:

I altered the Aptitude progression tables from the first class drafts. The originals had a really dramatic range of success rates (25%-40% at low ranks with with 75%-90% at highest) that just didn't work for me. While it wasn't too bad for contests, saves and checks have you attempting to roll under these scores. Low ranked characters almost always failed and higher level ones were so adept I think it'd be dull.

These new tables have a much more gradual range and allow lower ranked characters to be reasonably competent and higher ranked ones to be less boringly so. These will be included in the second draft of the classes, assuming I don't change my mind again.

On to Trait Generation!

Every character has a starting Trait. To reiterate something I'm sure I mentioned at some point, this is a couple of characteristics or a sentence with a set of innate modifiers for a character's aptitudes attached. This is mainly to help keep characters unique, as well as give players a starting point for their personality.

Typical trait generation is the first thing rolled for character generation. The player rolls on the below table three times.

Random Trait Bonus/Penalty
The first two results give a +1 to the aptitude rolled, while the last one applies a -1 penalty to the one that comes up. These can stack or cancel each other out, so the result is always
I like this, it keeps things varied without changing the totals too much. I don't mind people being on an even keel.

I am thinking about including an alternative method, one for Gm's and players who like characters that are all over the spectrum. In this system, a player would roll a d6 for every Aptitude, and applying the below modifiers.

This can result in anything from a character who is a bit incompetent to one who has is good at everything; I think it's a fun dichotomy but I don't think it should be the standard. It definitely has legs as an optional method, though.
Posted by NaldoDrinan at 19:48 No comments: