Hey everyone! I'll be running two games of BREAK!! at TridentCon this year. Everyone should check it out. 😄
Posted by NaldoDrinan at 18:38 No comments: 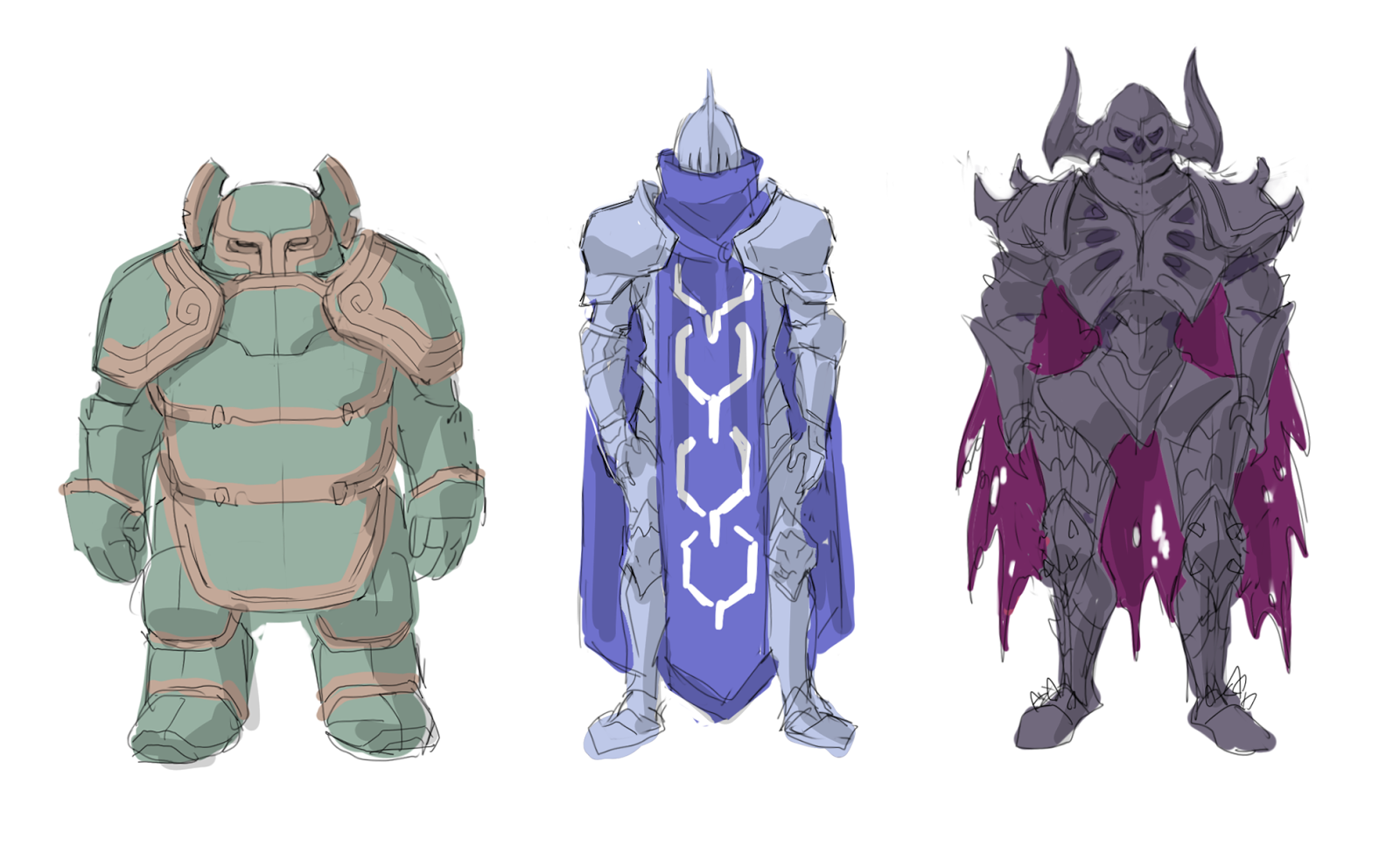 Some armor concepts for y'all:

I probably should have posted this one first, but - best laid plans and all that.
BREAK!!'s character creation is intended to be brief and fun while still yielding an interesting result; I think we managed that pretty well!

Pink is eager to sink her teeth into the new campaign, so she decides to make her character a few days before. Naturally, she makes sure she has everything she needs before starting.

Pink begins by scanning the Calling Chart, since that’s part of the first step outlined. She thinks she could have fun with all of them so she decides to Roll for it randomly.

Pink is tentative at first, as a solid image of Mariah is forming in her head and not all the available species fit it. She eventually decides to roll for it anyway when the Game Master reminds her that she can always re-roll or choose if the result seems off to her.

Now that she has a very good idea of the the sort of character she wants, Pink has decided to pick a few things rather than roll for them.


Part 5: She gets knocked down, but she gets up again

Anxious to have her character completed, Pink turns to the dice again to decide Mariah’s Quirk.

Finished, Pink is left to fill out the details while the Gamer Master helps the other players create their Characters.

Another request was to see how the mechanics of Downtime Activities work. There are a bunch of things you can do (including an option for an action that doesn't quite fit with the others) - they are basically the sorts of things that are important to your character but wouldn't involve the entire group. Examples include Crafting something, training a monster companion, building a reputation around town, and so forth.

Here's a brief example of how it goes:

After a successful endeavor, the party returns to the town of Homble for a chance to relax. The players express a desire to rest there for at least a week, and Blue decides this justifies a session of Downtime.

Posted by NaldoDrinan at 18:57 No comments:

Thanks to our increased social media presence (and awesome new teaser page→) I've gotten a few requests to showcase some of BREAK!!'s mechanics. Which, fair enough: All this art is slick and great, but you want to see under the hood a bit, right?

I thought a good way to do this would be to share some of the Play Examples I wrote to better explain the rules. I figure this way you get to see how they work without me just re-printing big swaths of the book here in the blog.

First things first, the cast of the Play Examples is a gaming group that is fashioned after the different sorts of players I've seen in my day.

[I am adding a few Meta Notes in Purple here, as requested by Grey. He suggested it might help make certain things about some of the Character's various Values Clearer]


A long time lover of tabletop role-playing games, Blue pours his heart and soul creating open scenarios, wondrous adventure sites to explore and dangerous monsters to contend with. While great at being patient and accommodating the players, he has to work hard to keep things challenging.
Get the look→


While new to tabletop role-playing, Pink is a big fan of video games and anime, meaning she is well versed in a lot of the basic ideas of BREAK!! already. She is always eager to run with just about any hook the Game Master presents to the group. Maybe a little too eager...
Get the look→

Player Green (Character: Wumble, Chib Factotum)
Green is the oldest and most strategically minded of the gaming group. He is always coming up with battle tactics and long term plans, but he has to watch himself to make sure he doesn’t boss the other players around too much.
Get the look→

Player Yellow (Character: Sha, Human Raider)
Chill and easygoing, Yellow likes hanging out and chatting with the group as much as they like playing the game itself. While mostly attentive and helpful, sometimes they get distracted by their smartphone during play.
Get the look→

Player Black (Character: Groop, Bruun Sage)
Black is a storyteller at heart. Her characters are always carefully ingrained in the lore of the setting, and she tends to give Blue a lot of great ideas and asks good questions. Black does have to be careful not to make the whole campaign all about her character, though.
Get the look

Most of the play examples are written in a more text book narration style, but I did a sort of script style for Combat since I wanted to goad Grey into drawing a mini comic for it.

The party has taken a job from local beast rancher - a rather ornery Chompa has been tearing down their fences and gulping up their pudge grubs. Spurred on by a desire to help the poor guy (and the fact that they are broke), they head out the clearing where the Chompa resides.

Blue: You finally come across the Chompa. The surroundings are a dead giveaway - crushed rocks, gnaw marks on the ground, the works.

Pink: Geez, do they just eat everything?

Yellow: Sha may know...she’s from around here, so maybe she’s seen one before?

[Yellow rolls their d20, getting a 16. This is way over Sha’s Insight of 9. Even a bonus from her Purview couldn’t help. Yellow sighs and debates switching to another die for the session. ]

[Sha's a 2nd Rank Raider, which gives her a base Insight score of 8. She has a Trait (Clever) that gives her a +1 to her base, which is why she has 9 Insight]
Yellow: Nah, I rolled over. Sha shrugs and shakes her head.

Green: It’s best to be safe and assume they do. I figure-

Blue: OK, let me draw out the battlefield.

[Blue draws out a rough battlefield on his playmat. This combat is pretty simple, so there are just 3 Areas: the spot the party is in, one for the Chompa’s resting spot, and one in between, where all the crushed up rocks and holes are.]

Blue: These holes here are deep but obvious enough to avoid, even while moving fast. The rocks might be big enough to hide behind in a pinch. Neither you or the Chompa has the advantage of an ambush here, so it’s your go.

Pink: I summon my Heart’s Blade and move to attack it!

Pink: Nuts, that’s too far to get to it and attack normally.

Green: Move up and go into Reactive Mode! That way you can draw it out and attack it when it comes at you.

Blue: OK, so you’re going to attack it if it comes at you?

Pink: Yeah, that! I wave my sword around to get it to look at me.

Yellow: Sha is going to take a shot at it with her bow. I guess it’s gonna be her Hunter’s Focus for this fight.

Blue: Gotcha. The Chompa is a big target but it also has a thick hide. You have to beat a 13 to hit it.

[Yellow grabs a second d20 and rolls both, since their character has an Edge on Attack Rolls against the target of their Hunter’s Focus. The results are are an 11 and a 13. Either would hit with Sha’s +2 Attack]

[Yellow eats one of the candies they were using to keep track of the amount of arrows Sha has left.]

Blue: Thwack! The Chompa loses a heart. It’s down to 3.

Green:  I’m going to toddle up to the area Mariah is in but I’m staying clear of that thing!

Blue: OK, if everyone’s done it’s the Chompa’s turn now. Sha pissed it off with that arrow but it’s dumb enough to think Mariah is at fault, so it’s rushing her. Since it’s slow, it will be doing a Charge Stunt so if it misses it’ll be easier to hit.

[The condition for Mariah’s Reactive Mode occurs, so she get’s a chance to attack.]

Pink: Ha! Just where I want you! I bring my Heart’s Blade down across it’s big head!

Blue: Nope. It’s a little faster than you expected, closing the distance before you can get your sword down. Soon it opens it’s dreadful maw for a Mighty Munch.

[Blue grabs his trusty d20 and rolls it out onto the table. Everyone watches in fear as it lands, showing a result of 19. The players look to Blue in a panic.]

Pink: ACK! That’s all of them!

Blue: You’ll need to roll on the Injury and Damage table, then.

Blue: Yup, the Chompa’s teeth tears at your armor, reducing its defense by 2 points.

Pink: Great, I’m easier for this thing to chew on now!

Yellow: You didn’t die though.

Blue: Anyway, it’s going to use the second part of Mighty Munch, and try and pull Mariah into it’s mouth…

Blue: Might Contest between you and the Chompa, Pink!

[Pink gulps and rolls her d20 at the same time Blue does. Pink’s comes up as a 4, and Blue’s an 18. Fortunately for Mariah, this exceeds the Chompa's Might Aptitude so she is the victor in this Contest.]

Blue: You pull away from the Chompa after a struggle - it manages to snatch away some of your armor and shake you up quite a bit, but you’re uninjured for now.

Pink: This is the worst! (Pantomimes wiping Chompa spit off her arm.) We need a better plan, guys..

[Combat will resume with the player’s actions, since both groups are still around and kicking! What do you think you would do in their shoes?]

Forgive my cornball prose style, everyone.
Anyway, I'll give an example of downtime next!
Posted by NaldoDrinan at 18:19 4 comments: 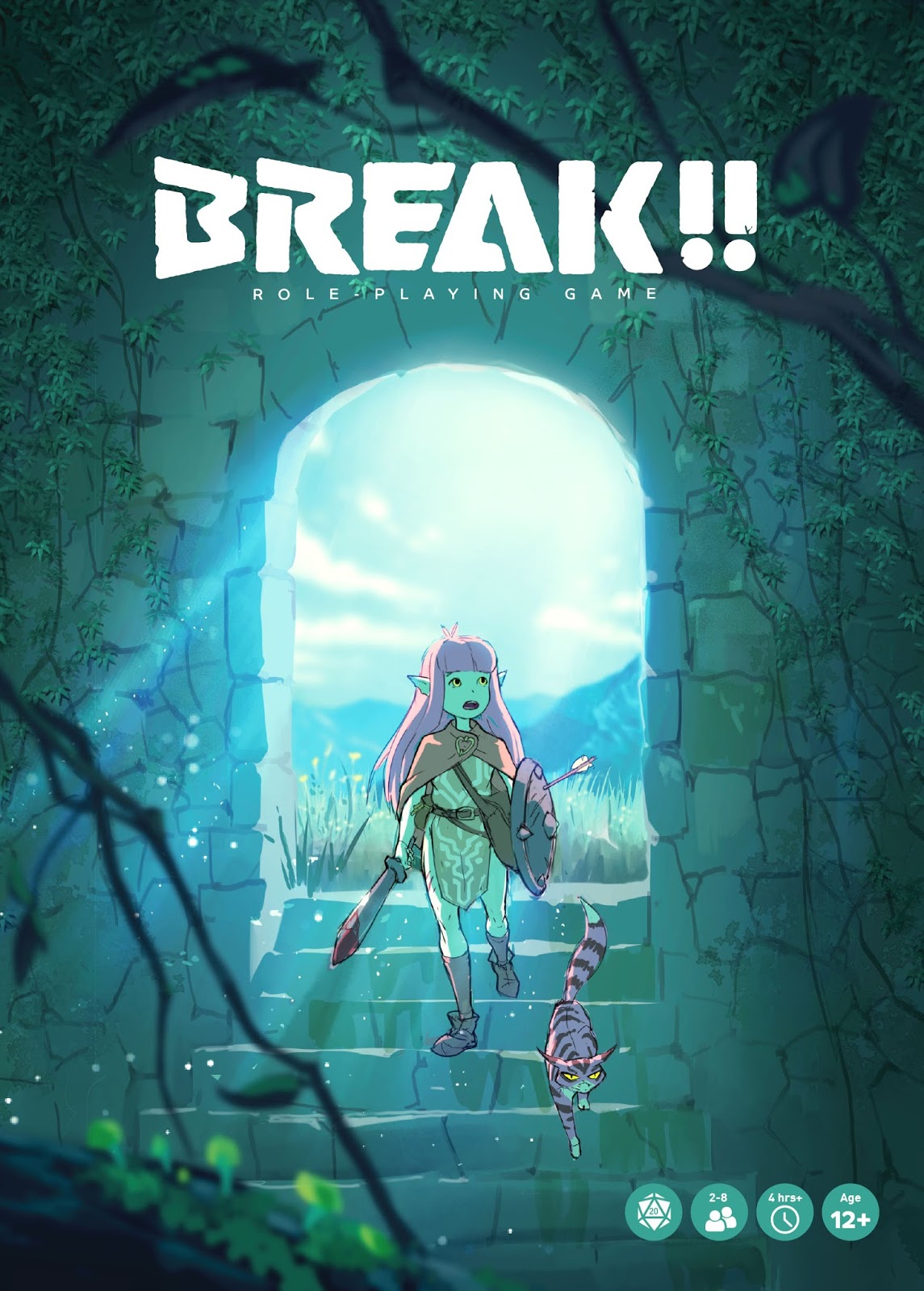 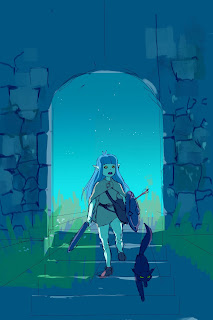 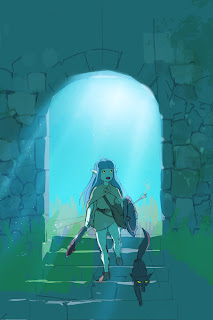 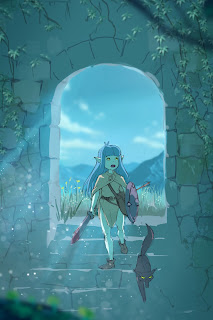 Just a rundown of places you can find, post, and even discuss BREAK!! information!


All of these places will likely share information, though each will cater to different needs so it's really an option of how (or if) you want to interact with us.
Posted by NaldoDrinan at 10:31 3 comments: