Why is BREAK!! Taking so long?

There are 4 steps to our Formatting Process: 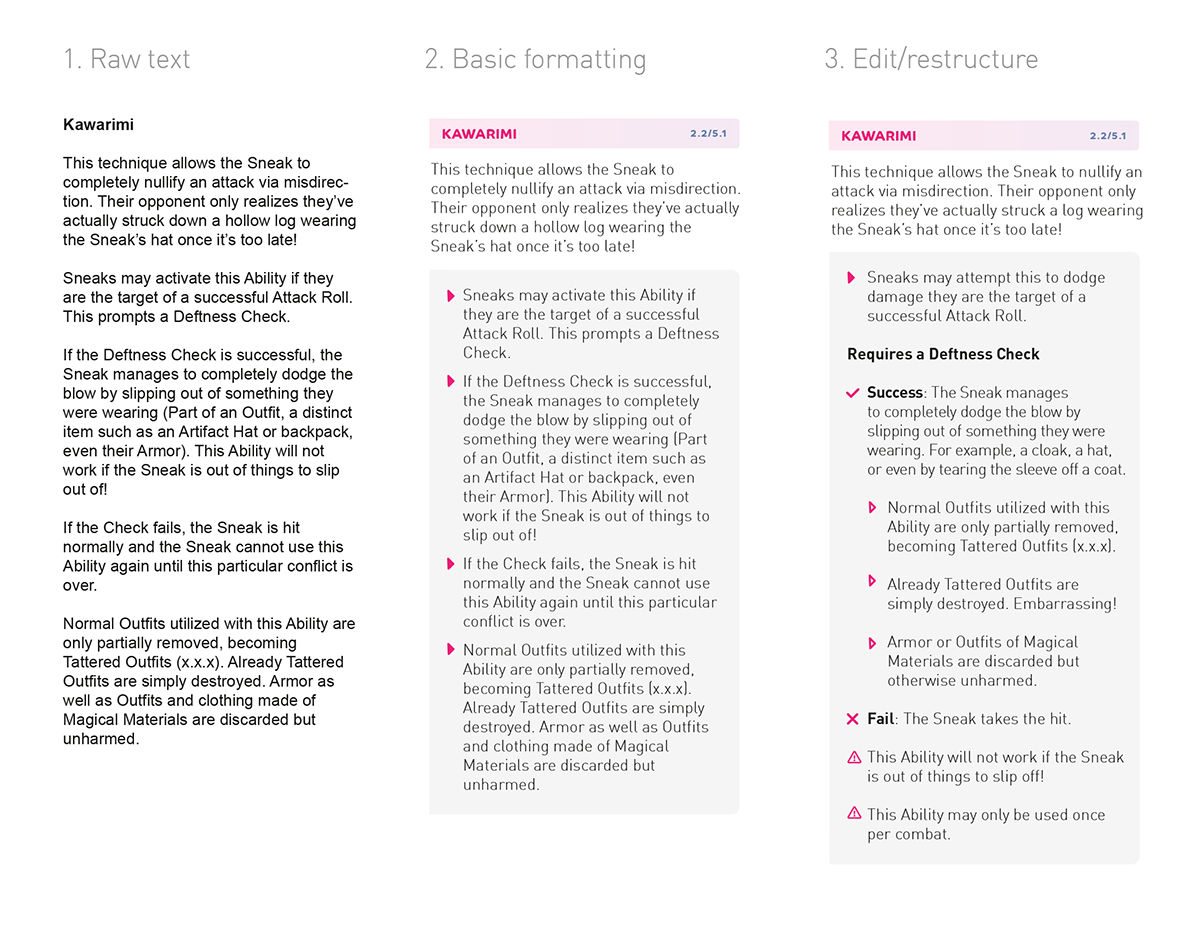 Whether a Failed Check (as in the example above) should have a Fail bullet is one of the many things under review. Should prolly only have these if the Failure has a mechanical consequence.

With Magic abilities also looking at maybe having specific icons for recharge and casting times.
Posted by Grey Wizard at 10:56 2 comments:

I want the species in BREAK!! to look like they could be the product of their environment, while preserving key fantasy tropes (the origins of Outer World species do not strictly follow Darwinist principles after all).  Also had fun thinking about their various life stages. 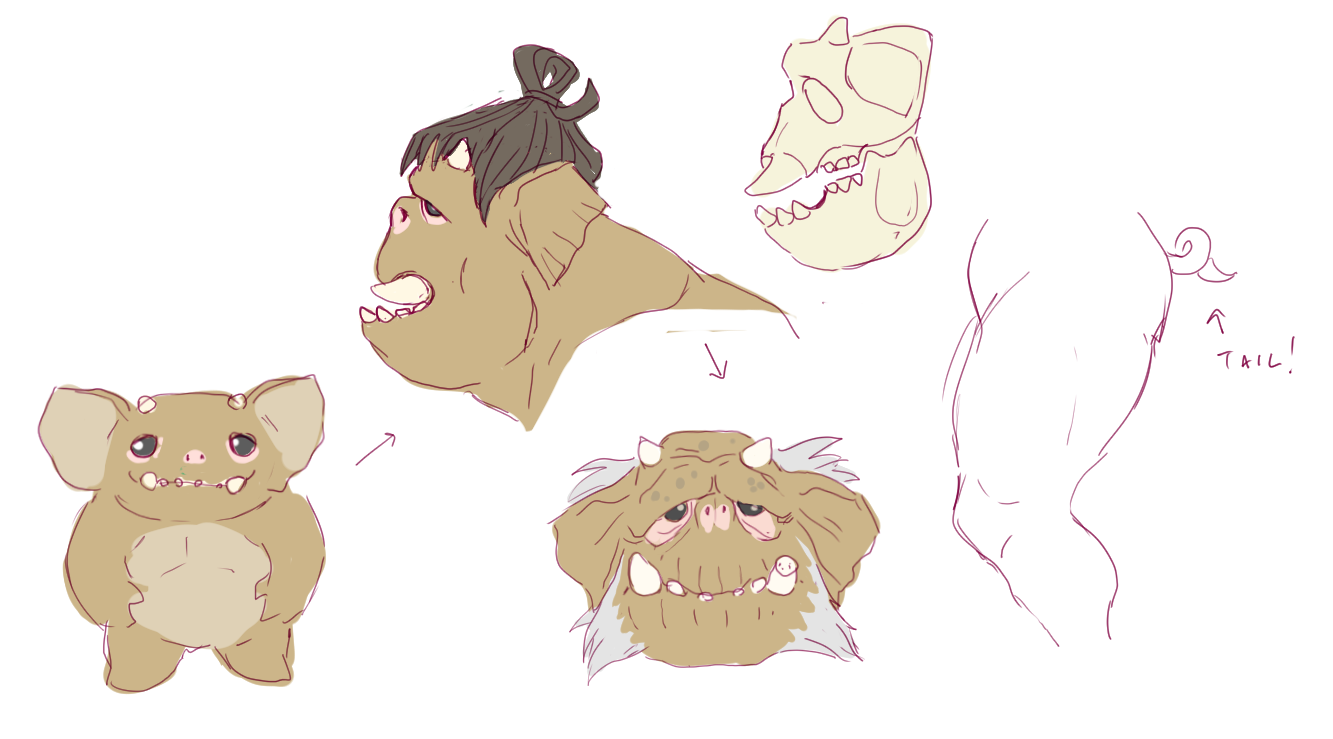 Bruun. Live in the Blazing Garden. They are a sort of hybrid elephant/gorilla (with some pig). Small, deep set eyes don't need to let much light in. Large brow creates a shade for the eyes. Large ears help keep them cool.

Thinking maybe they are vegetarian.﻿

More species noodles... Chibs are created by magic. They were designed to be the children of lonely wizards. But they figured out the ritual and started self replicating. So I'm thinking they are like animated jelly/clay with maybe soft bones. Idealised cuteness.

The new creations are naive and impressionable, they just want to be cuddled. Very quickly they realise they are the unloved. Most older chibs are drunk/bitter souls.﻿

I imagine their are idealistic pockets of chibness, hidden villages etc. But the more Chibs interact with other species and travel the earth, the more they struggle with their sense of purpose/identity. It's very sad.

They are, from birth to death, the same height.﻿

Dwarves are carved not born. Like the a kinda Terracotta Army. Life eventually seeps in to the stone, and while eventually fleshy they have an angular/chiselled appearance. They are cold to the touch.

In old age, they are cracked and moss covered.﻿

In death they revert to stone. There is a hall of heroes. 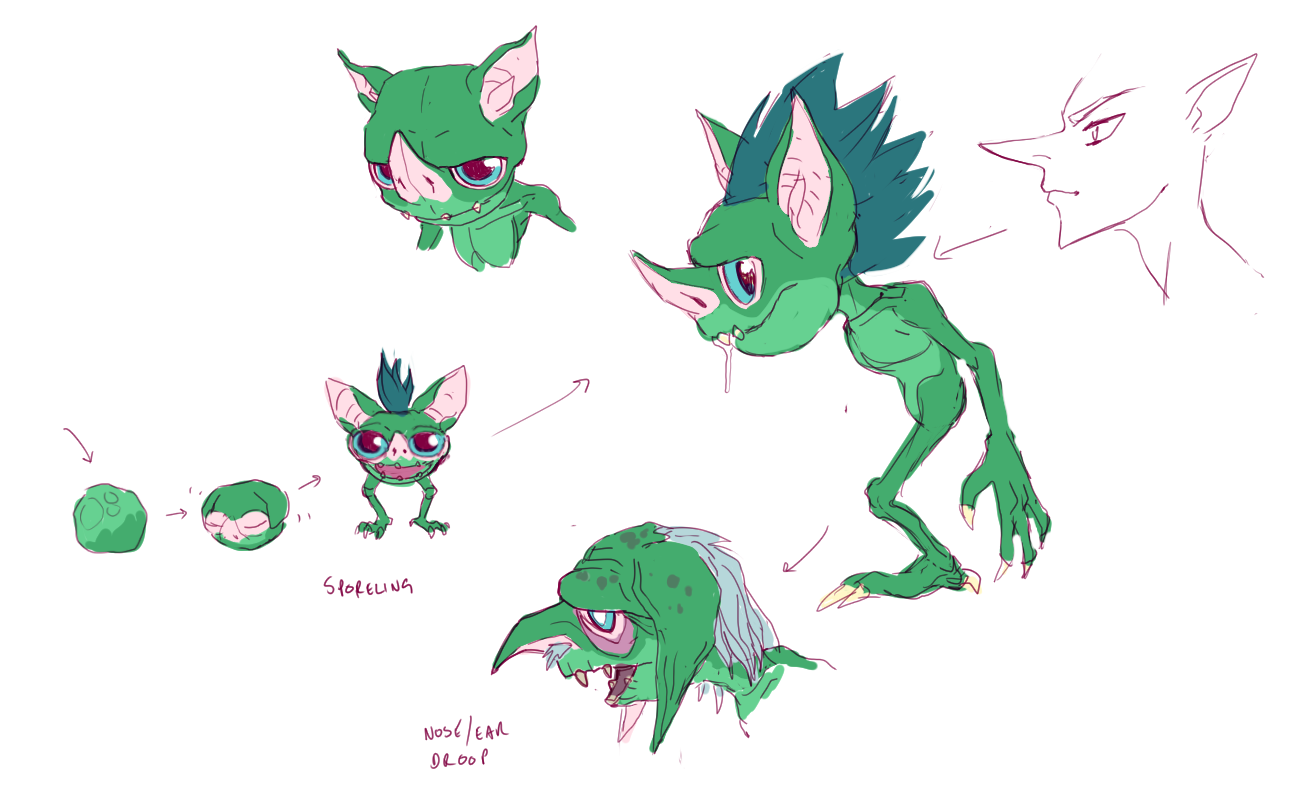 Have tweaked my goblin design a bit (to differentiate the head more from the orkish Bruun). Living in the dark their sensory organs are developed make the most of low light (big eyes) with powerful sense of smell, and perhaps echo location for pure dark? Nose designed to skin the floor when climbing (which their claws are good for)

Goblins have a cool ability called Spore (where they can produce hirelings... it's who they procreate) Figured they could pop off gremlins-style and then unfurl. Be a tadpole like state for a few hours before becoming fully grown.

In old age, where due to lifestyle many don't have to worry about, ears and snout droop. There spore making days are over, poor things.﻿

Prometheans are towering and muscular. They are immortal and have regenerative powers. Limbs grow back, but the repaired tissue is strangely serpent-like.﻿

Maybe they have eggs? They are sort of left to hatch and survive on their own. Life begins with a Spartan like coming of age trial.

The eggs are a delicacy among the older Promethean aristocracy.
Posted by Grey Wizard at 14:51 2 comments:

I've been reviewing the design system now I have largely got all the words into Indesign. The real content, as expected, is creating new demands of the layout system and exposing areas for improvement. 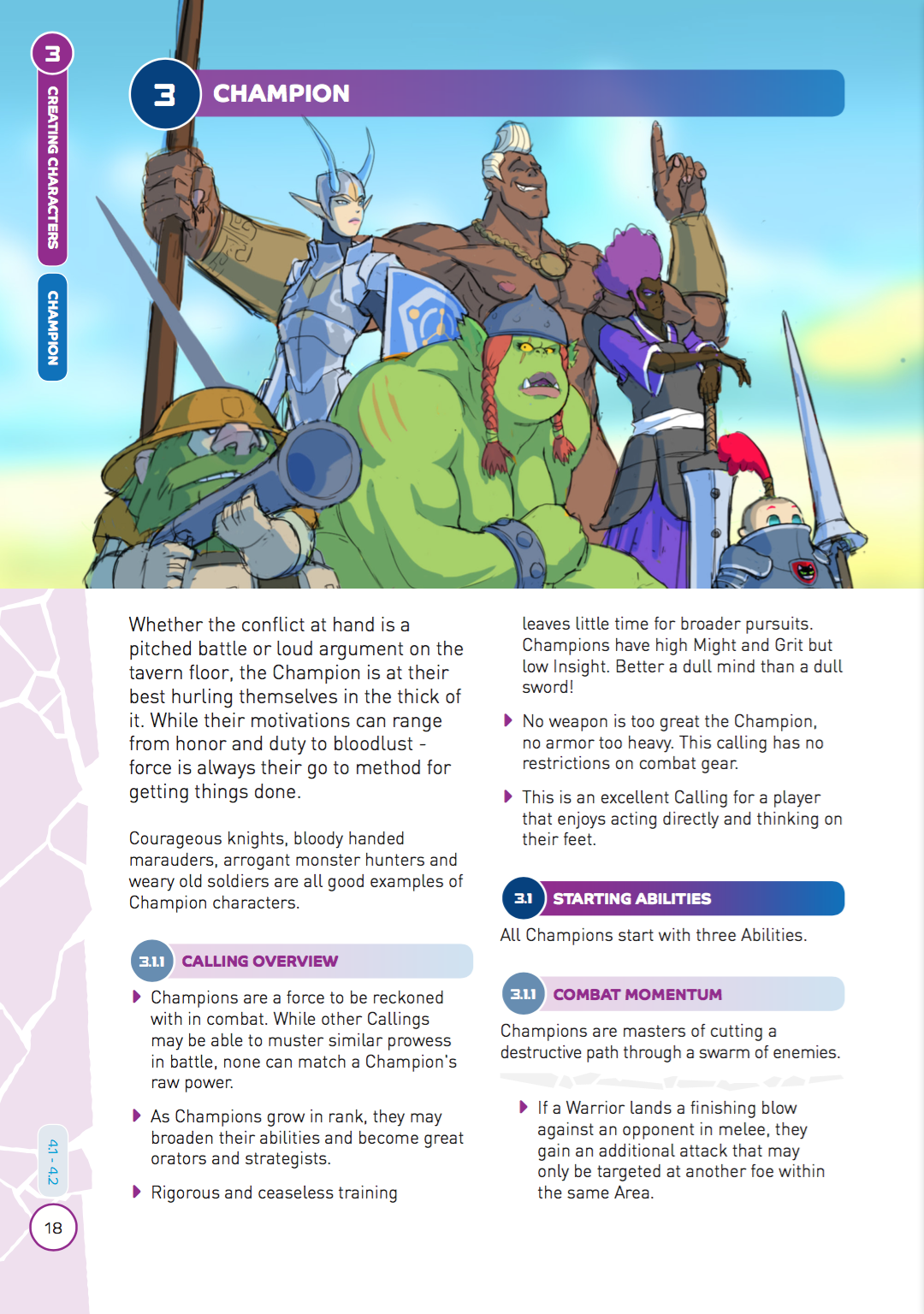 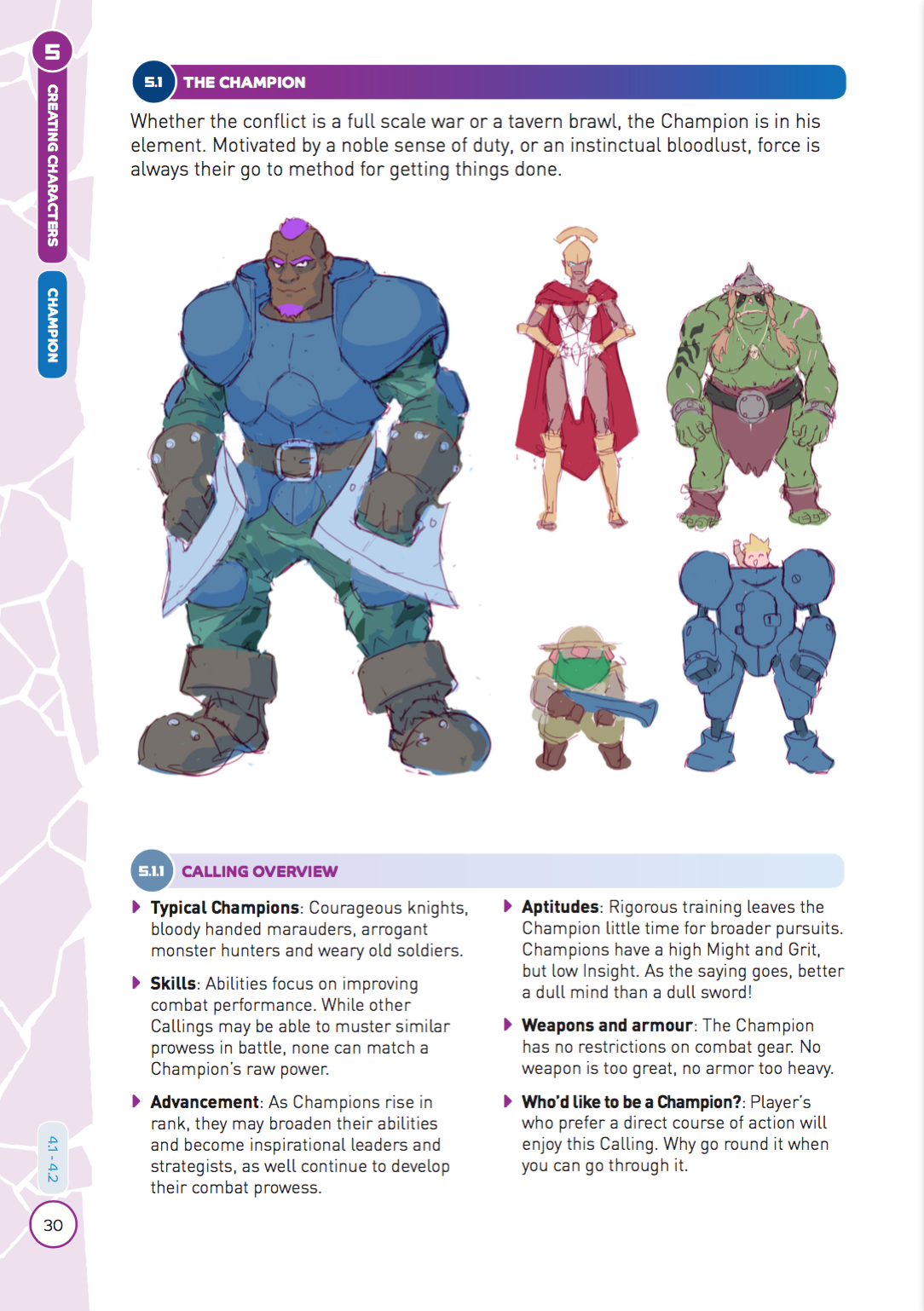 PS. The copy WILL have typos!
Posted by Grey Wizard at 09:34 No comments: