So I've taken Rey's rough cut of the monster template (and sample beasts) and had a stab at the layout. Was really looking forward to designing the bestiary but so far it's proved more frustrating than rewarding. Results to date are satisfactory. Have posted work-in-progress for y'all.

The bestiary will most likely group monsters by environment and will be sorted from Ambient through to Minor, Major & Boss class (low to high challenge). The hope is that this organisation will make it easy for GMs to identify an appropriate adversary with minimal fuss. Clustering the creatures by play zone should also give a nice holistic view of each ecosystem.

Boss monsters will have the most complex layout. Maybe illustrated special attacks, strike points and additional forms/mutations. Will be a 3-4 page entry.

Minor & Major will be quite similar to each other in terms of presentation. Depending on the creature it may include a few of the boss layout elements. Prolly 1-2 page entry.

Ambient covers notable flora and fauna. May not even require a stat block and be 1/2 page (or less) entry. 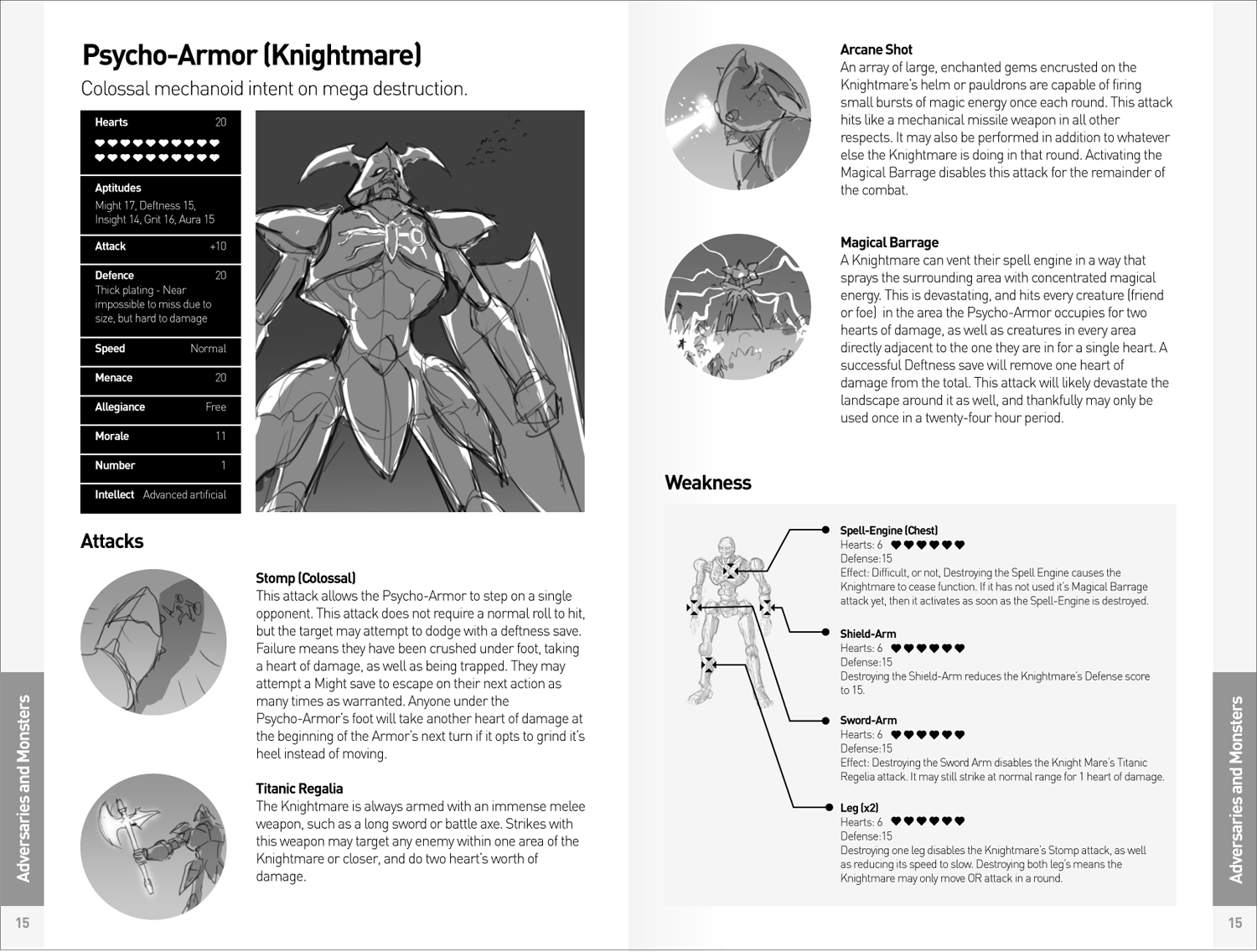 1st spread of Psycho-Armour (boss) Note: Another page with additional info is needed 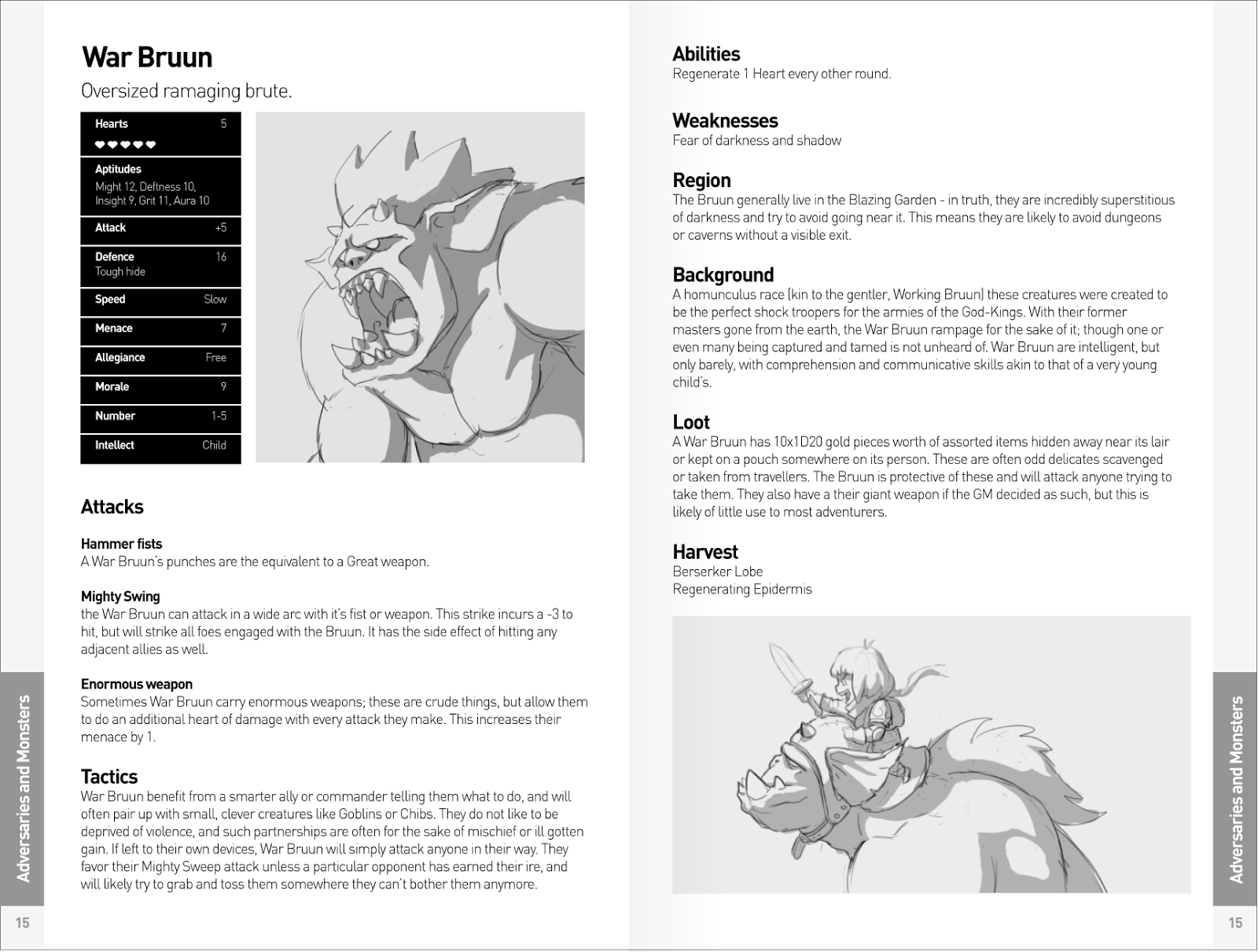 The War Bruun pages feels a little dull. Maybe a size chart and location map could add a little more visual interest (as well as being useful). Possibly my current typography system is too minimal.

The stat block needs more design love (introducing more of the icons I've developed elsewhere, making it visually distinctive, etc) It should be the main focus of the page, and I rather crudely achieved this by making it a black slab and thus introduced some serious legibility issues (small, light type reversed out of black?! that won't print well either)

The other design choice I'm struggling with is whether the main image should be more technical in nature (side/front elevation) or be more of a flavour/mood illustration. Hmmm. 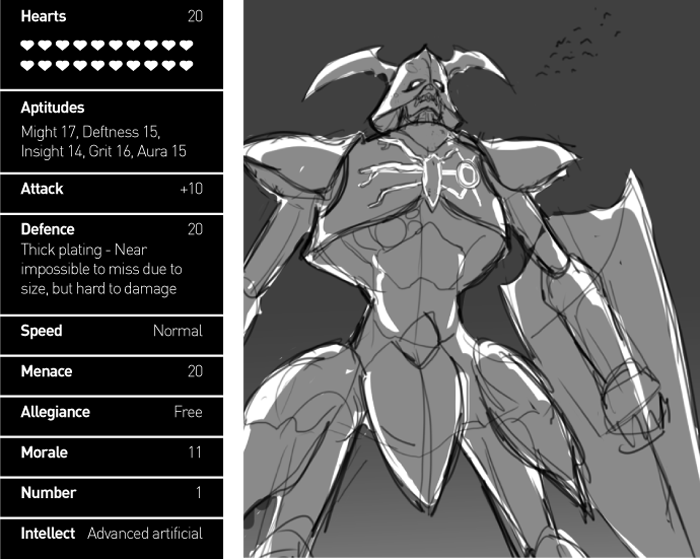 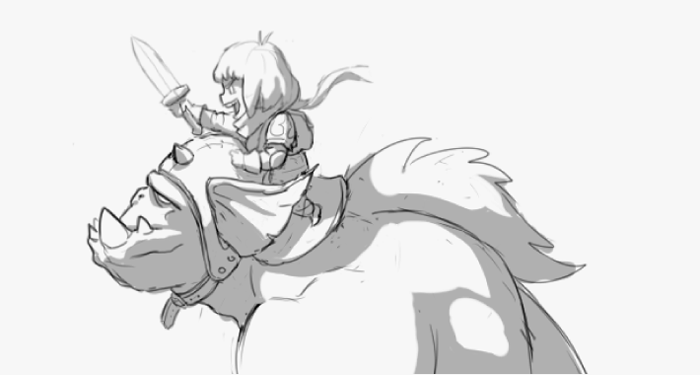 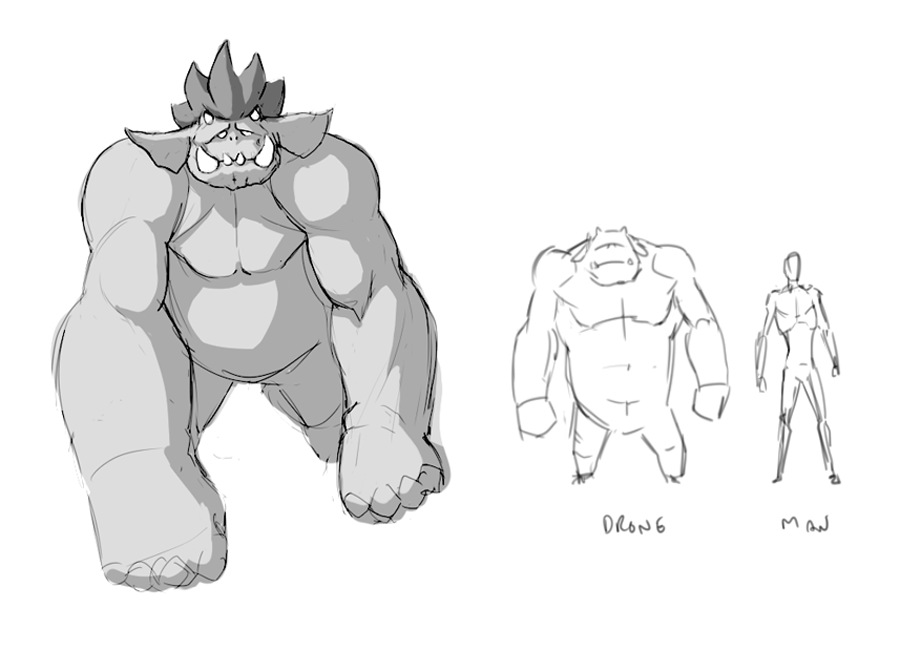 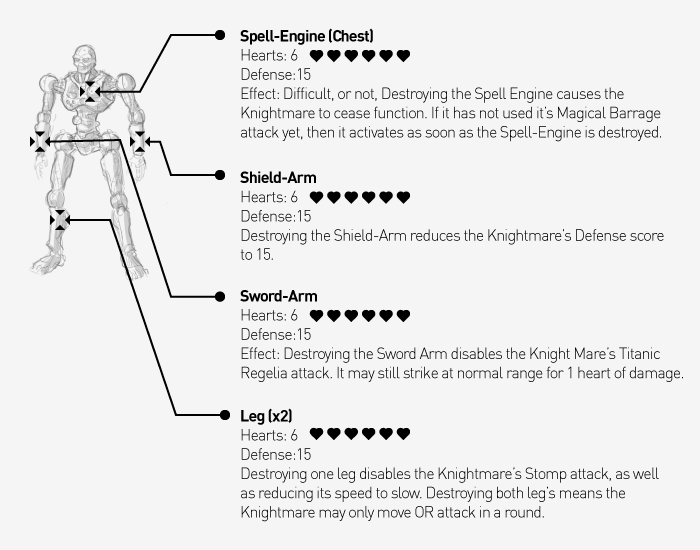 Note: Drawings are not final representations and are still pretty rough/embryonic (though am quite pleased with chib saddle-helm)
Posted by Grey Wizard at 01:14 4 comments: 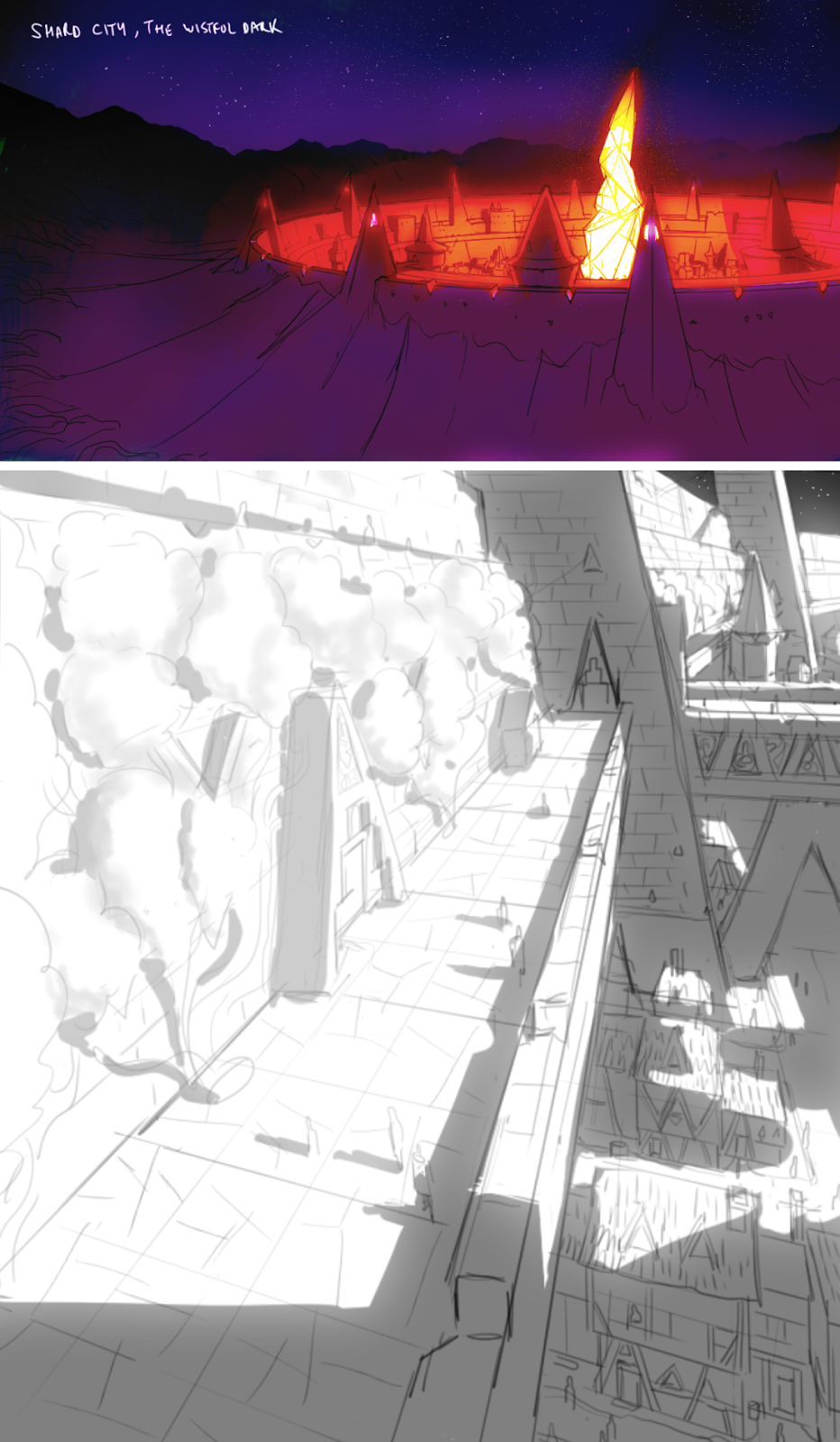 City built into the crater site of a fallen star shard, lighting the eternal gloom of the Wistful Dark. 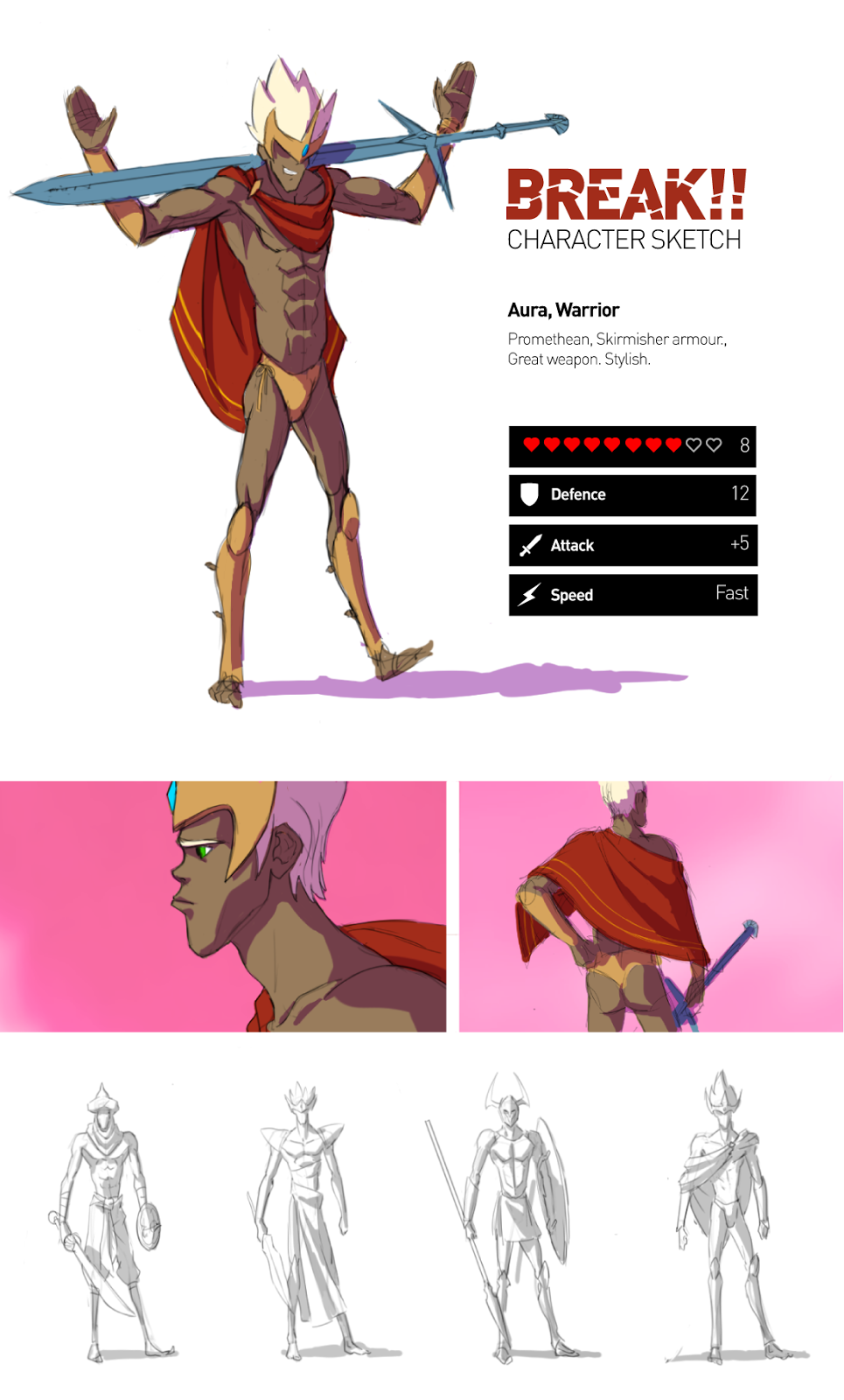 This hunk from the Blazing Garden will put style before safety anytime...although the defensive qualities of a promethean battle thong shouldn't be underestimated (also very good at keeping the sand out)
Posted by Grey Wizard at 05:12 1 comment:

Sorry for the bit of radio silence this weekend - I've been out of town at a convention. This is always fun, but combined with my normal work schedule its a big drain on my energy. Everything I wrote earlier was a bit off and I'm not even sure this is quite up to snuff - but dammit I promised myself I'd update every week and I have half an hour to do that.

So my drive is full of mostly realized rules in very rough format. Grey has corralled me (as he is wont, the man is extremely good at focusing and organizing thoughts) and pointed out that there is enough here for something distinctly playable.

So here is my goal; I would like to get an initial play-test out to you guys soon. I'm sticking to my original estimate (around the end of march) to keep myself motivated and to prevent procrastinating. I encourage each of you to heckle me until then.

Anyway, this first packet will (tentatively) be called "Break!! - Sword Saga" and focus on basic, non-spell casting characters involved in the game. The planned content includes;

This should either increase or decrease my posting volume in the next couple of weeks, I'm hoping for the former.
Posted by NaldoDrinan at 20:35 3 comments:

Email ThisBlogThis!Share to TwitterShare to FacebookShare to Pinterest
Labels: Update 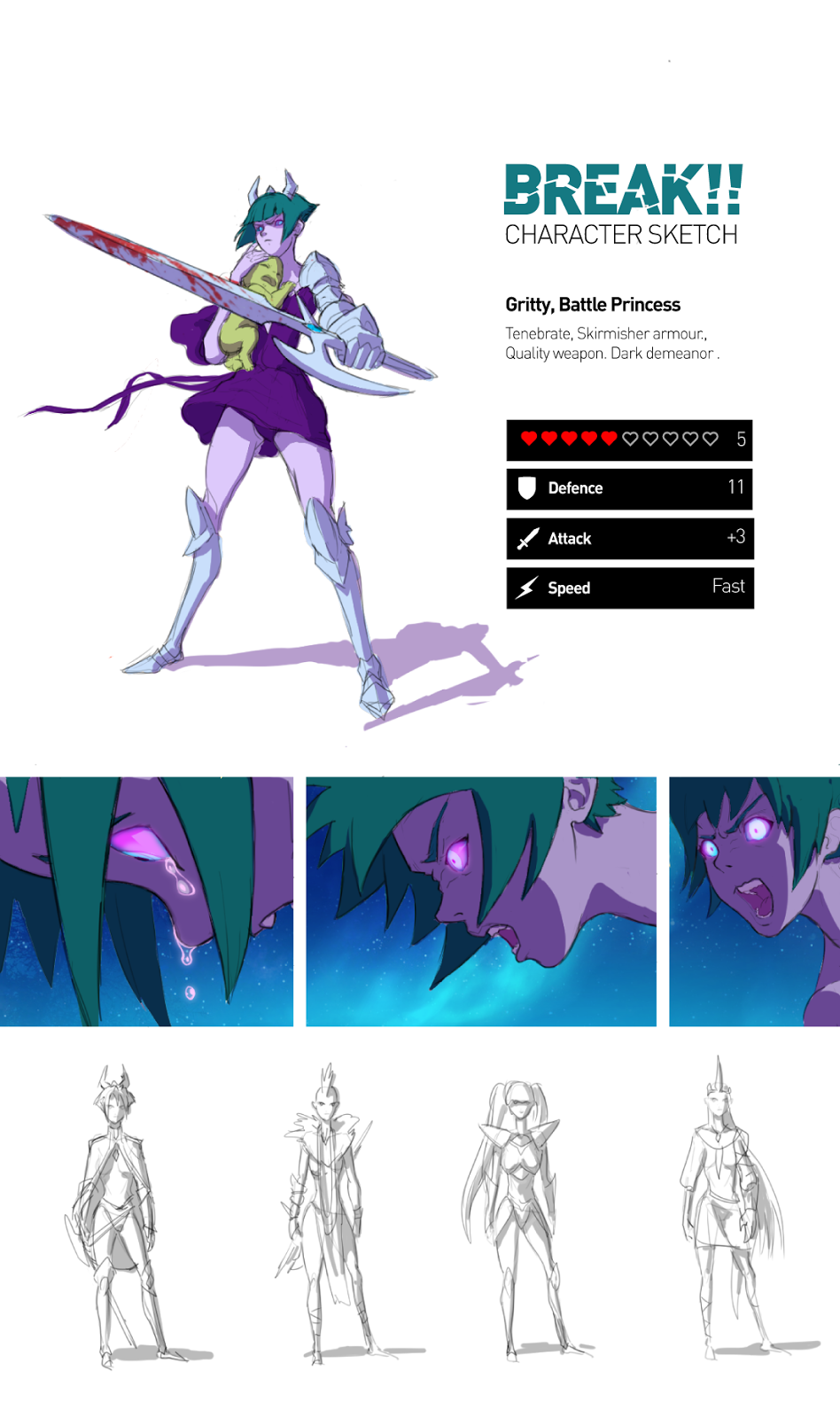 Magical tears of rage!
Posted by Grey Wizard at 06:24 3 comments:

This entry is another cheat; Grey asked me for a bit of implied setting info so he could better work on various stuff for the game. I figured I should start talking about the implied setting a bit more anyway, so I'm also posting some of it here. I'll admit to being a bit nervous; I have confidence in how I run games and my grip on mechanics, but I always worry my actual in game fluff is lacking.

A note - I want to explain setting via other things (monster background, relics and artefacts, magic spells, etc) as often as I can. This is for three reasons; It's encouraging for players to find out things about the world by piecing things together rather then being told, it means players and GM's who are uninterested in the setting (usually because they want to make their own) can glaze over it or alter it at their leisure, and it prevents game books from becoming overly padded.

That said, I can indulge myself here and there, right?

Regions of the Known World


The Wistful Dark - A lost land that never sees the sun. The landscape is dotted with the ruins of Old Akenia and strange flora and fungi that feed off ambient mana. Creatures warped completely by shadow wander, driven by a hatred of light. The Tenbrates were born here, and do their best to survive in an unforgiving but hauntingly beautiful realm.

A few here seek the solace of the Star-Shards, pieces of the sun that fell to the surface. These grand crystals create small areas of twilight that drive off the worst of the shadow-creatures and allow civilization as we understand it to thrive. Occasionally, the light of these shards begin to dim and their keepers must seek ways to restore and maintain them.

The Mana Blight - Neighbor to the Wistful Dark, this wasteland is the sad remains of one of the three great empires. Their zealous misuse of sorcerous weaponry left behind a dismal legacy; what creatures survive here are twisted and horrible beyond comprehension.

There is however, a wealth of old world treasure to be found here if one is willing to seek it. Rumors that the old tree of life still manages to grow somewhere in this place has drawn out many eager adventurers to their untimely demise.

The Blazing Garden - On the other end of the world lies a continent where day is eternal and the watchful orb of the Emperor of Sol hangs in the sky vigilantly. The Promethean people make this place their home among the other humunculus species. It is also populated by things large and dangerous, their growth unhindered and in fact supported by a land of plenty.

While Emperor Regulus once ruled this place without question, he is now troubled. While food is in abundance, populations have swelled to the point that land is not. Strife is widespread and large scale war seems inevitable. On top of that, a mysterious child known as "the wicked prince" leads a group of dream-molded creatures on an endless, marauding parade.

The Buried Kingdom - Beneath the surface is an old land, untouched by the constant struggles of the overlord. Those here tunnel tirelessly in hopes of finding glories of the old dwarven kingdoms and the hidden world of Promise. They often find death at the hands of the bizarre horrors and hazards to be found there.

While this place's most consistent promises are madness and oblivion, many confirm that both the old dwarven rumors and Promise are real. Though, so are the strange and horrible caverns warped by the abominations that dwell in them.

The Sea of Shadows and The Glimmering Waves - The ocean of the world is split in two, one where the constant sun reflects off the pristine water and another where unaccounted shadows swirl beneath. There are dangers in both; the sea witches rule the dark half of the ocean while sapient alien reef holds dominion of the other.

Sailors on this contested ocean must be prepared to deal with the dangers of one or the other. The most ambitious must contend with both, as well as braving the twilight merdian; a sort of estuary where the separate oceans clash.

The GM's guide will likely contain an abstracted map of the world, as well as a more detailed area and sample adventure set in the Wistful Dark.
Posted by NaldoDrinan at 14:05 2 comments: 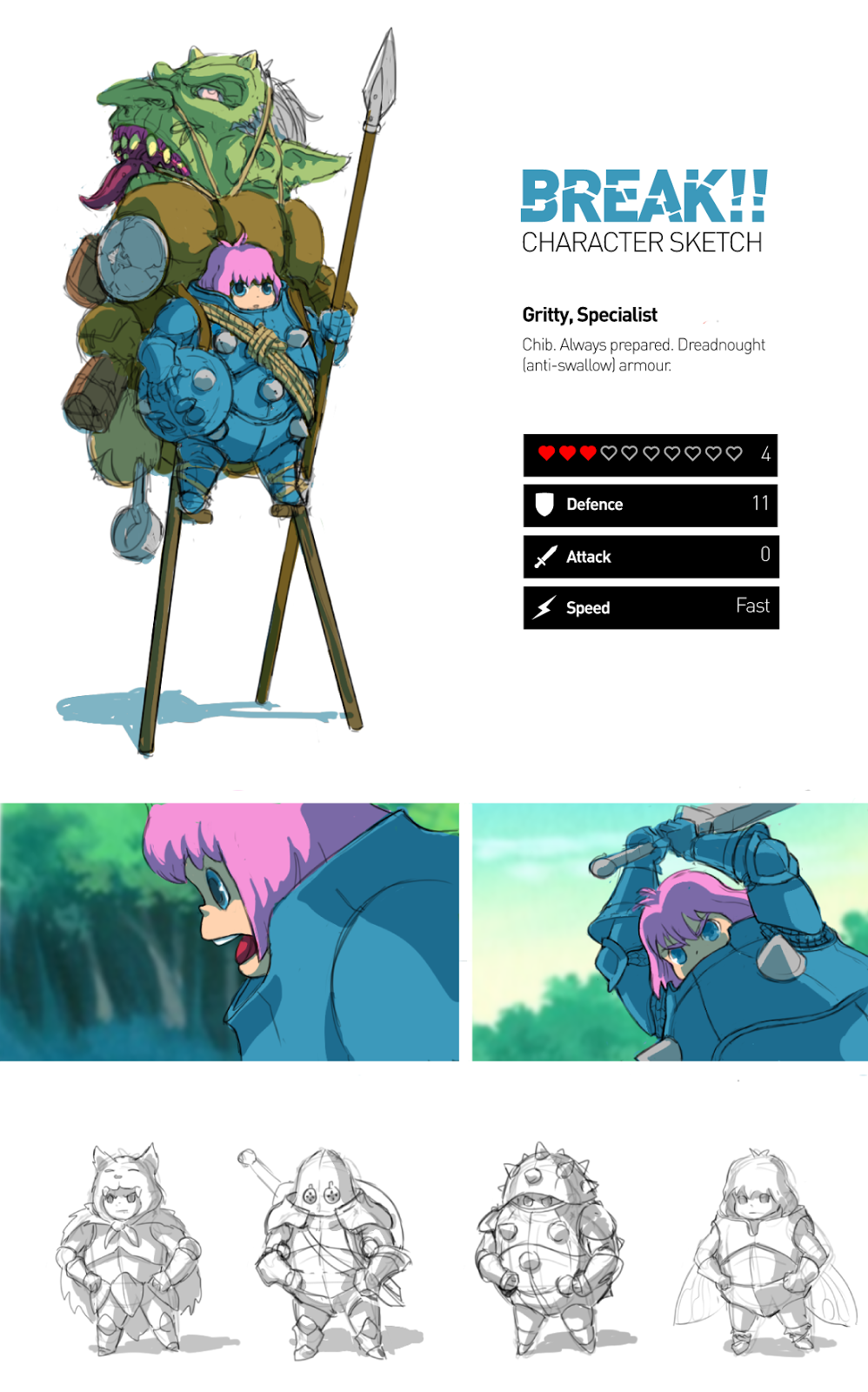 Not sure what aptitude or calling makes sense for this guy (might/grit? - warrior/specialist?)
Can imagine him/her being kitted out in equipment specifically selected for the mission at hand (e.g scuba gear for the submerged temple, fire resistant cloak for the dragons lair).
Posted by Grey Wizard at 02:12 6 comments:

Inspired by friend and all around smart guy Joey, I started taking a couple of side notes on super-tech stuff while working on the meat of the rules for Break!! I like the idea of characters having to figure out how to use certain advanced relics they find, and having a side-score for that means it could be role-played and sussed out without too much trial and error/pixel bitching ("So um, I hit the green button and turn it sideways, anything now?")

Then I thought - well, why the hell do magic items just work? Wouldn't this stuff be just as mysterious and wondrous as lost technology? I mean sure, I could hand-wave it and just say "It's magic" but I think that's kind of dull.

So I'm thinking every character has a rating for (Tech) Comprehension and (Magical) Concordance. Usually, characters start with 0 in both these scores. Certain Origins, Species Traits, and Calling Abilities raise these, but otherwise they only way to do it is by toying with and understanding techno relics or magical artifacts. I've chosen the names rather deliberately - Comprehension is about understanding the old world's weapons and tools and putting them to good use, while Concordance is related to intuition and how in tune one is with the forces of magic.

They also both start with "C", and I've got to have something alliterative in this damn thing. Its like RPG law, or something.

The nitty-gritty basics thus far are as follows;

One thing to note is that downtime is pretty important in the game. The time you are spending poking around with new toys could be spent carousing, training henchman, researching or attempting to romance the local nobility. I'm also considering making it so that items with multiple uses may have various features tied to different complexity/attunement levels. So you may be able to properly wear a suit of old world powered armor if you have a comprehension score of 1, but you won't be able to use its acrobatics suite without advancing to a tech level of 2.

Oh, yes - my wife (a constant consultant in these matters) said she would rather just pay an NPC to look at this stuff for her character, so one function of hirelings or sage like NPC's might be to figure out how to use these things and then teach the character. While their inherent scores wouldn't improve, it would mean a PC would have time available to dedicate somewhere else.